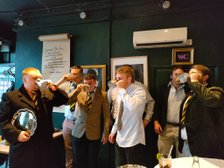 Club finishes off the season in style!

Wotton pull off double header at end of season climax

Wotton RFC celebrated the end of their season with back to back sessions – firstly on the pitchside on Thursday 9th June, the club held their AGM, which has been publicised for all members to be aware of and had a good turnout, of around 25 people. Chairman Tim Brown paid tribute to the commitment of the players and committee who have worked together to get through a tough season, the first one post Covid.

The main committee of Chairman, Treasurer Jamie Gillespie and Secretary Gareth ‘Mr Rugby’ Davies were re-elected, and the announcement of the new appointments of coach Gareth Westwater, vice captain James Battensby, as well as the additions of Mark Easton as Facilities Manager and Dai Lloyd and Mitch Clark as social media managers shows the club in good health. Club captain Gary Coulter will continue at the front and Lee Barton will take over as Team Manager whilst offering support to the new coach.

The club has seen a massive influx of new players, some of who are also new to rugby, and WRFC as always embraces players of all ages and abilities, which we would love to see more of. We are hoping to go on tour at the end of the next season (2022/23) which was due to be announced, but details to be confirmed.

As if the excitement of a formal meeting wasn’t enough, the drama carried on into Friday 10th. The day was started by some bad news, in that vice-captain Battensby had a little mishap on his way home from the AGM, but having rather cleverly positioned himself as the Gillespie’s adopted elder child/live in ‘help’, he seemed relatively upbeat about things and is looking forwards to be driven around indefinitely.

Then in the evening came the Annual End of Season party, at Chris Hull's fine establishment, Good Food on the Edge in Wotton. Chris & Emma put on a marvellous spread for the boys and a great night was had, also defying the rules of space somehow by operating as a Tardis for the night and getting everyone in!

Official Award winners were;
Top Try Scorer – Gary Coulter
Young Player of the year – James Battensby
Most improved – Mitch ‘The Great White’ Clark
Clubman of the year – Jamie Gillespie
Captains Plate – Matt Potts
Players Player of the year – Huwdas Edwards
Champagne moment – Alex ‘Bosh’ Boshier beating off Nathan Brown’s left testicle (!) , Rob Marlows catalogue of 50/22’s and James Battensby’s ‘3 wheels on my wagon’ effort – Bosh under the guidance of former WRFC player Sam Chappell changed positions this year, and clearly learnt how to manage later night drinking sessions from his mentor too as he met up with the police and told them that he was WRFC captain – a new star!!

Life membership was awarded to club legend James ‘Needles’ Needs, who has contributed massively to the club both on and off the field over the years. There are half a dozen or so club members who have had this honour in the history of the club, and James is a great example of a WRFC player who thoroughly deserves this honour. The club are also paying for him to see Wales’s home defeat against New Zealand in the Autumn Internationals.

President Lee Barton also made a heart felt speech acknowledging Mitch Clark’s commitment to the club and saluting the efforts of all of his ‘ponies’!

The club ended up at their home, The Star Inn, at the end of the night after a great evening, with just under 40 people attending, showing that despite recent rumours, the club is in extremely good health, and looks forward to the new season!!

Come and join us - we are a social rugby club who love having fun as you can see, and we would welcome new members or players to come and join our band! Message any of the committee for more information.