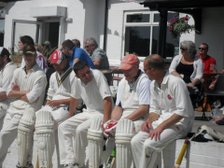 In 2011 the team got off to a flying start, with Captain Rawcliffe smashing an opening day century and Bamford getting 99 before deciding to get stumped to win at Anchorsholme and start a run of 6 wins in a row in league and T20 Cup. There was the odd wobble but Wyre kept winning until July and made it to T20 Finals day once again.

On the day itself, Longridge V proved a tough semi final opponent, but Radford Amos batted and bowled superbly to take Wyre through to the final on a baking hot day at St Annes CC. Ingol made it to the final for the first time and these two heavyweights went head to head. Ingol batted first and smashed the ball to all parts amassing a formidable total of 159/5. Bamford and Rawcliffe went out to the batting wicket and got off to a disastrous start, both going 1st ball, Wyre 0/2! The rest of the team battled on and we managed to make 132 which was a good effort but once again falling at the last hurdle. This brought the usual mid-season slump and our league challenge faltered and we were out of it with a month to go.

Our cup form continued and we got to the final of the 40 over, Wareing Trophy, playing against Longridge at their home ground. In wet conditions we were set 150 to win and set about the task confidently, but a tail order collapse along with some questionable umpiring meant we fell an agonising 14 runs short and once again claimed the silver medal. In the end we finished 3rd in the league and runners-up in both cups.