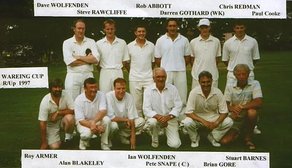 Wyre Cricket Club was formed in 1994 after the break up of the Over Wyre A and B teams. Due to League registration rules it was necessary to retain the club title as Over Wyre B for that season and only four players remained from the original club, Rob Abbott, Roy Armer, Steve Rawcliffe and Pete Snape, who between them have completed 700+ games.

The team had its home ground at the ICI sports grounds in Thornton, which was owned by Thornton International Sports Club. Over Wyre B was quite liked by most teams in the Fylde League as it was viewed that a game with them improved most players’ averages, the team had been bottom of the league for a number of years! Although the demise of Over Wyre CC did release an amount of playing gear we had little funds to cover the season and it was a kind loan of £300 given by two of the elder players and a further £650 sponsorship which had been gathered by ex player John Davies which kept the team viable for some 3 years whilst getting re-established.