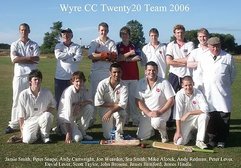 Roll on 2006 and the new home pitch at Cottam Hall!

2006 will be remebered as one of the clubs best seasons in our history. Finally the team performed consistently, with great spirit and camaraderie throughout the long hot summer. New signing Mike Alcock led the fight from the front, opening the batting agressively and winning the FCL batting trophy with an average of 50.3 and high scores of 107, 97, 94*. Steve Rawcliffe bowled as fiercely as ever, winning the FCL bowling trophy with 51 wickets. Andy Cartwright shone with the gloves, taking 17 victims and the FCL best wicketkeeper trophy. But best of all, all the team members contributed to a vintage year and were victorious in an exciting battle for the FCL title with Preston III and Baxi and claimed the 2006 Close Cup for the FCL Championship.