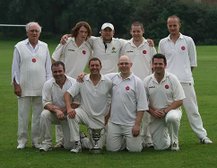 2008 promised much with the aim being to defend our title again and become only the 3rd FCL team to win a hat trick of titles back to back. However after a rare home defeat early in the season to St Annes IV, Wyre were always on the back foot and playing catch up. St Annes stormed off with their powerful batting line up and formidable bowling attack taking on the challenge of going for their first ever FCL title. Whilst we were playing well, the season didn't have the feel of the last two however we gave chase with great vigour. The main game of the season was the rematch with St Annes in Warton, with the victor likely to have the championship lead going into the final few months. A great bowling display knocked St Annes over for a small total, however St Annes decided to do the same to Wyre and bowled them out for even less! From then on it was a case of winning as many games as possible and hoping for a St Annes slip up. Both teams kept on winning andonce again the title race was very exciting, going to the last day of the season but whilst Wyre won at Fleetwood, St Annes beat baxi to take the title. Another good season and to finish 1st, 1st, 2nd in the last 3 years is a fine achievement for a club of our size.

In the Fylde Twenty20 League, the Wyre Cavaliers once again had a good season and played in a variety of conditions when other teams went off to the pub! Progress was made from last year and qualification for the Finals Day was harder due to the weather and an extra team in the league. Disappointlingly we finished outside the qualification zone, despite playing as much as possible in the wet and going the whole season without being bowled out. But with EVH being unable to get a team together the Cavaliers were back! In an amusing twist, the first game was a rematch of the amazing 2007 Semi Final Rushale v Wyre and once again the game didn't disapoint. Scott Taylor and Bamford demolished the Rushale top order and set a lowish total. However the Cavaliers ever make anything easy and the game seemed to be slipping away with wickets falling in the run chase, however Captain Bamford came in to smash a few 6's and leave Wyre needed only a few runs off the last over. Youngster Rob Gregson played admirably and Lever sacrificed himself to get Steven Taylor back in to face the last ball of the match with Wyre needing 1 run to win. Taylor stroked a fine cover drive to seal the victory and the pitch invasion followed. However never without controversy, the Rushal eplayers complained, only to be placated after being told they had misread the scoreboard. Sadly the final against Jolly Boys was a more one sided match and with the Cavalier schasing 154 it was always tough. Despite some fine batting from Chris Gregson and Bamford (managing to get a beamer in the face then smash the next ball for 6) Wyre never had enough fire power and settled for runners up spot. But another progressive season and promise for the future.