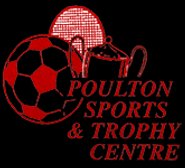 Wyre CC 1st XI suffered their first defeat of the season to South Shore on Saturday. Wyre won the toss, and inserted South Shore on a drying wicket. The first half of the job went well, with Tom Rawcliffe taking 4-13 and his miserly father Steve Rawcliffe bowling 7 overs, conceding just 2 runs. South Shore recorded a total of 70 all out. However, South Shore responded well, dismissing Wyre for 59 off 23.2 overs, as Wyre recorded 5 ducks. The bright spark for Wyre was Jon Hargreaves who scored an ebullient 34, striking 4 fours and 2 sixes.

Despite the loss, Wyre still topped the table at this mid-season point, with South Shore second, having edged them out on runs per wicket and progress to the second stage in the "Gold Group A", pitted in a group with Wrea Green 2nds, Darwen 3rds, and Walton-le-Dale

Trevor at Poulton Sports and Trophy Centre has been a big supporter of the club over the years, and they have been established in the heart of Poulton-le-Fylde since 1987. They:

Please ensure prompt arrival to assist with set up of cricket facilities and Covid 19 precautions.