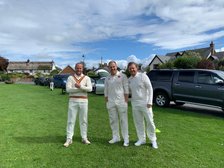 As usual, I turned up late, but to my luck the rain had delayed the start. As the umpires paddled and squelched round the square for the next hour and a half, the Wyre players decided to go and get a drink from the pub across the road. Lefty clearly stated to the skipper that “it was non-alcoholic”, to prevent any moaning had Wyre lost the game.

Finally, at about half 2 we decided to start play, we won the toss and elected to bowl first, which I thought was a bad idea as Wyre often fail to chase down even the smallest of amount of runs (South Shore). With one run up looking like a swamp and the other slightly better the Skipper opened from the swamp end with a wicket in the first over, to get us off to a good start. Me and my Dad (Steve Rawcliffe) had four overs each, leaving Wrea Green down two wickets after 8 overs. Then the Skipper chose Callum to bowl on his debut game. His left arm over bowling caused the batsman, and Neil quite a bit of trouble after rather a lot of beamers and a lot of variation in line and length. He finished with figures of 4 overs for 14 runs. Lefty bowled very tight from the swamp end, even after he had to cut down his run up. He was unlucky not to get a wicket and finished with figures of 6 overs for 8 runs. After that Polly bowled very well picking up two wickets, but he did get hit for the only four of the innings. Stewart from the other end bowled very respectfully for his first appearance in the 1st, with figures of 6 overs 2 wickets for 15 runs. After my Dad bowled the 29th over Wrea Green finish with a score of 73, which seemed reasonably ok to chase but with Wyre anything can happen.

A quick turn around, and the Wyre openers were ready. After just one over my dad couldn’t resist throwing his bat at a short ball outside off, it went straight to a fielder and he was caught. As usual he came out with an excuse (the rain had started so he needed to smack it.) Callum was also out LBW very early, to end his debut in the 1st team. It was not looking good as the rain had also started falling. With the very capable batsman (Marcus and Tim) now battling away in the rain we needed to start thinking tactically about the Duckworth Lewis rule. The two of them played themselves in for a couple of overs before Marcus hit a couple of twos and the only six of the game in the over after that. We then played two more overs picking up single here and there until the rain was too heavy to stay out. The game was then abandoned meaning the Duckworth Lewis rule would decide the game. Thanks to Marcus’s big over and Tim’s rapid running between the wickets Wyre had beaten Wrea Green on the Duckworth Lewis role, finishing on 27 for 2.