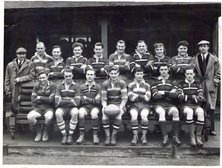 One of the oldest clubs in Yorkshire, Yarnbury's history dates back to 1872, when the members of Headingley Hill Congregational Church first took the field. It was not, however, until 1896 when a joint camping trip to Upper Wharfedale with the Leeds Rifles Brigade that the Club was renamed Leeds Yarnbury. Yarnbury was the name of the Hamlet just outside of Grassington where the players were entertained after a game against the local side. In the early days Yarnbury had a slightly nomadic life moving from ground to ground in the North Leeds area but finally settled in Horsforth in 1926.

The photo shown above is from Keith Jowsey who played for Yarnbury 1953 - 1966 before he emigrated to New Zealand. Keith passed away on the 22nd August 2012.

In 1974 our present ground in Brownberrie Lane was opened with a match against Upper Wharfedale. The introduction of leagues to Rugby Union saw Yarnbury installed in Yorkshire 3 and a steady climb up the league structure culminated in promotion from North East 3 in 1999/2000 season. The reorganisation of the leagues now see us playing in Yorkshire 1. Yarnbury's current success has been built on a steady stream of players from our successful mini and juniors section. They provide the club with a sound base to continue putting out 4 senior sides each week. Year 2001 saw Yarnbury's profile lifted to its highest point when former 1st team Captain and former President of Yorkshire, Mr Roy Manock, received the accolade of President of the Rugby Football Union.

As one of the oldest rugby football clubs in Yorkshire, our history is long and interesting. Headingley Hill Congrgational Church, Headingley Lane, Leeds, consecrated in 1866, had a football team but, in 1871, when the laws of rugby football were established it decided to play under that code the following season, and the primogenitor of Yarnbury RFC was duly born. In 1893, the chapel formed the 6th Leeds (Headingley Hill) Church Boys Brogade, affiliated to Leeds Rifles Regiment based at Carlton Barracks. In 1896, at the joint Boys Brigade / Leeds Rifles summer camp at Grassington, with most of the chapel rugby team also in the Boys Brigade, they, along with some of their Leeds rifles, played rugby against the village team, then captained by Fred Bonsor, the brilliant half back of Bradford, Yorkshire and England. After the game Captain F. Stocks entertained the Leeds team at his cottage, "Yarnbury House", two miles up the fell in the hamlet of Yarnbury. In the post match euphoria it was agreed to re-name the chapel team "LEEDS YARNBURY RFC" and allow members of Leeds Rifles to play in it; this early association with the rifles regiment is commemorated by the light infantry powder horn incorporated in the club crest.

Prior to 1907 the club played on Tannery Field, Meanwood, and a number of men went on to play for Yorkshire and England or to become important figures in public life. In 1907 the club moved to a field near Butcher Hill, West Park, with changing facilities at St. Chad's School.

Few of the members survived World War 1 but the club re-started in 1919. In 1926 it moved to play behind the Grey Horse Inn, Long Row, Horsforth. After a break for the second World War the club re-started in 1947 and moved to Parkers Field behind Horsforth Cricket Club, changing in the cellars of the Old Ball Inn and washing down in a tin bath. In 1949, Horsforth Cricket Club gave Yarnbury its old pavilion and a bath hut, accommodating only 6 at a time!

In 1951, the club was allocated the King George V pitch adjoining Horsforth Cricket Club and recognition, (Horsforth) was added to the club name in place of Leeds. The following year the club built 3 changing rooms, 2 baths and a tea room out of 4 hospital huts - our first club house.

In 1963, the club bought the present 11½ acre site and built a club house in 1969. Since then there have been a number of major building projects and with the purchase of an adjoining field in 1995 now makes us a 4 pitch club.