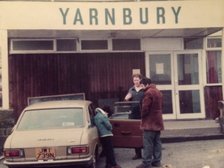 The Yarnbury Junior Section was founded in 1971/72 when a club members wife spotted an article in a womans magazine. The article was about young children playing 'mini rugby' at the newly founded junior section at Huddersfield. Following the formation of junior sections in New Zealand, the Huddersfield club decided to follow suit and were the first in Yorkshire to establish a rugby section for junior players.

Bob Barber (Yarnbury's Current Match Day Co-ordinator) suggested to a current playing member at the time, John Riley (now our Senior Fixture Secretary) that Yarnbury should do the same. The move coincided with the clubs centenary year (1972) and the 'Yarnbury Juniors' was established and became the 2nd Junior section in the region.

Pictured above is a very shy looking Steve Lee (current Yarnbury Junior Chairman) being brought up to the club for the first time by his dad, Peter. He is being introduced to club stalwart, David Brown c1978/79.

Due to lack of playing facilities at the club it was decided the Juniors would train & play on the King George Playing Fields behind the Old Ball Pub. The first week saw nearly a dozen children turn up. The following week it was decided that a small advertisement in the Yorkshire Evening post would be taken out in an attempt to grow the numbers. The ad, along with posters on notice boards and word of mouth meant over 70 players turned up for the 2nd week!

Parents of the players formed a Junior Committee & very quickly set to work putting some structure in place. At the time, junior teams in New Zealand were decided upon by the weight of the players. This made some sense as it prevented 'big uns' running at 'little uns'. However the newly formed Junior Committee opted for a more traditional age group approach.

Teams from Otley and Morley followed suit and in a short space of time regular fixtures were taking place. Games and training alternated each week and because there wasn't a governing body to help/advise at the time, the rules were more or less made up as time went on. It was agreed that nine players would compete against each other, with four making up the pack (no hooker) and five playing in the backs. In those days players went straight into to doing contact as 'tag rugby' was introduced much, much later.

Bob Barber took the role of Junior Chairperson, a role he did for 10 years and other parents helped with organising rugby sessions, fixtures and off field activities such as social events. Bob's wife spent time in the kitchen preparing players meals and even found time to wash the kit!

The juniors moved to playing at Yarnbury around 1974, with the first game being played against Wharfedale, a club close to where Yarnbury takes its name from (see our club history by clicking here). In 1995, Raymond Johnson the clubs President at the time led the fundraising campaign to purchase the land at the side of the 1st team pitch. This provided space for the juniors to play & train at the club instead of the short trip to King Georges Field.

The Yarnbury Club realised the benefit of having a strong junior section as they soon began to have success. Within a few years most established amateur clubs in the country had set up their own junior teams and the Yarnbury Juniors had already begun to be the life blood of the club.

Over the years many junior players have gone on to feature in 1st team rugby, in fact 14 of the players who featured in final of the Senior Vase at Twickenham (2014) were products of Yarnbury Juniors.
In addition to this the club has produced 3 internationals, Paul Swales (scrum half/fullback), Mike Aspinall (scrum half) & Alex Webster (prop). The club has produced countless Yorkshire representatives, the latest of which is Lewis Wray (visit our honours section by clicking here).

Bob Barber & John Riley continue to serve the club to this day and the junior sections have never been so strong with teams represented at every age group from under 7's to u16's.