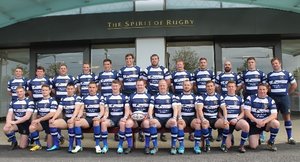 Both sides entered in to this crucial league game wanting maximum points .West Park to get off the bottom of the table and Yarnbury needing to get back on the winning track.Yarnbury started with the recognised 15 but with George Oldridge coming in for Danny Pound who was unavailable and Captain James White in the back row allowing Josh Bell in the centre in his favoured position to partner James Endersby and Luke Cowley back in on the right wing.Nathan Benton was back on the bench with Tom Whitfield and Ben Robinson.

The home side laid down a marker immediately and crossed for the first try in the first minute taking the ball from the West Park kick off and working the ball through the backs down the right and fast hands saw Josh Bateson score near the posts and Jack Brown at fiull back converting.A change from recent fixtures where Yarnbury usually gifted the opponents a start.West Park countered after Yarnbury were penalised and centre Alaistair Hughes got over but stand off Andy Cromack could not make the conversion.Yarnbury were soon back in their stride with the pack dominant at this stage and getting good ball for the backs made space out right for winger Josh Bateson to go in for his second try on the obverlap.Jack Brown converted from out wide and one wondered why he did not get more chance to kick for goal throughout the season.

Yarnbury were giving cheap field position away with successive penalties and the away side capitalised with a second try against the run of play Centre Alaistair Hughes going through a gap after stout Yarnbury defence.With Comack converting the game was tight at this stage at 14-12.Yarnbury pulled away again running the ball out of defence and George Bowen backing up a sweeping run from centre James Endersby..Jack Brown again converting from out wide and then converting a penalty when West Park killed the ball in a ruck in front of the posts.Yarnbury were looking to go clear at 24-12 and pulled further away with a superb planned move bringing in winger Bateson on the burst to score without a hand placed on the winger.A blow to the bottom club in the league and a bonus point for Yarnbury with this fourth try already in the bag.The high tensity of this local derby meant that both sides were intense in their rugby looking for local bragging rights with the home side taking the plaudits at the break 29 -12.

The second half was a much more competitive affair and started in disastous style for the home side loosing two of their established forwards shortly after the break prop Lewis Atha getting the head of No8 from his own side Tom Goldthorpe and both off the field for the rest of the match with head injuries and Atha going to the hospital for stitches above his eye and Goldthorpe groggy and bleeding from his head.Tom Whitfield and Ben Robinson as replacements.Also Yarnbury introduced experienced Nathan Benton at scrum half to counter the expected committment from substitute Jack Bickerdyke for the opponents.

Yarnbury pack was under pressure now due to the injuries and reorganisation but held out until the final moments when Park scored two late tries through their pack. Substitute Sam Board crashing over from close range after sustained forward pressure and West Park man of the match Luke Gamble doing the same with the last play and Cromack converting both to give the visitors two well earned points from a game that threatened to go away from them earlier in the afternoon.