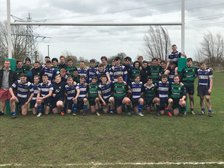 Great to get a game on with the recent weather but it was not quite the ‘Happy New Year’ champagne performance Yarnbury were looking for.

Ilkley kick off and Yarnbury are under immediate pressure when the catch is spilled. However the resulting free kick ends with Ilkley being penalised when not releasing the ball when tackled. Ilkley are winning the competition at the gain line with some big tackles and carries but are giving away penalties and making too many handling mistakes. Ilkley are penalised for a high tackle and Yarnbury kick into the oppositions 22 for a lineout but the throw in is not straight. Ilkley try to play out of their 22 but the Yarnbury defence forces a penalty at the breakdown. The penalty is taken quickly and the ball is moved out to Jacob Rawson on the wing who gets within 5m. Maxwell Lee exploits a gap in the defensive line to score and then duly kicks the conversion. After 5 minutes Yarnbury lead by 7. Within minutes Ilkley have drawn level when a box kick from the Yarnbury 22 is caught by their fullback who breaks the initial tackle but then skips past several other defenders to score.

Ilkley are beginning to dominate territory with numerous forays into the Yarnbury 22 but their attempts at finishing are not clinical. One such attack ends with a pass being thrown out of play. However the resulting Yarnbury lineout sees the ball dropped and Ilkley regather it to power over to score. Ilkley then knock-on from the restart. The ball is moved wide for Jamie McDonnell to break down the wing and then kick back in-field where Maxwell Lee wins the foot race to ground the ball. After 21 minutes the scores are again level. The half ends with Ilkley dominating, exploiting an overlap in the 28th minute to score in the corner (conversion missed) and driving over to score near the posts in the 35th minute when encamped in the Yarnbury 22. Half time: Yarnbury 14-26 Ilkley.

Yarnbury are chasing the game but the Ilkley flyhalf is controlling procedures with a kicking game to ensure that his team are playing in the right areas of the pitch. One kick takes play back to the Yarnbury 22 for a lineout where the Yarnbury throw-in is not straight and possession passed back to Ilkley. Ilkley fail to exploit an overlap out-wide and are held up on the try line but then score with a debatable grounding. The difficult conversion is just short but Ilkley have extended their lead to 17 unanswered points. Ilkley are applying pressure in the Yarnbury 22 when a clash of heads sees their flyhalf leaving the field with suspected concussion. In the 12th minute Yarnbury respond when James Longhawn breaks through a ruck, taking play upto the Ilkley 22 before a pop pass to Jack Brownridge in support. Ball is retained and moved wide to Keenan Dyer-Dixon who skips past the first defender and break through two tackles to score in the corner. Maxwell Lee makes the difficult conversion; Yarnbury 21-31 Ilkley. Yarnbury look for the next score to take the game to an exciting conclusion but, despite lots of possession, they fail to make any conclusive chances.

The game is finally put to rest with a flurry of tries in the last 5 minutes. Ilkley fly hack the ball through and, despite a couple of Yarnbury attempts to regather the ball, Ilkley score under the posts and complete the conversion. A few minutes later they win a free kick near the try line and power over to score in the corner but this time the conversion is missed. In the final play of the game James Longhawn again breaks through a ruck and releases Keenan Dyer-Dixon who is only stopped from scoring in the corner by a high tackle. However a quick tap and snipe by Oscar Andrews sees him score but the conversion is missed. Full time: Yarnbury 26-43 Ilkley.

Man of the Match: Keenan Dyer-Dixon