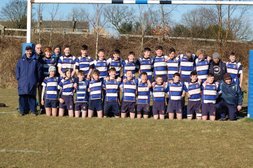 After losing 27-21 earlier in the season, Yarnbury bounce back to beat Morley by 20 points.

A strong first half performance saw Yarnbury build a commanding lead before the break, and an immense second half defensive effort saw Yarnbury come away with the win.

The opening exchanges were dominated by Morley, but when Yarnbury were able to get hold of the ball they cleared into the opposition 22. Their fullback ran the ball back into contact, but in the next phase the ball was dropped and a Yarnbury scrum was awarded. Joe Pilling broke from the base, sucking defenders in, and the ball could be passed wide for Jamie McDonnell to score in the corner. The conversion was missed but Yarnbury has drawn first blood 3 minutes in. 8 minutes later, Yarnbury found themselves in another promising position with a set piece – a lineout just inside the Morley 22. However the away side were tactically savvy, not engaging in the maul Yarnbury tried to set up. Because of this, the ball had to be passed through hands, but this was cut out by an interception which saw the Morley player then run the rest of the length of the pitch before scoring near the posts. The conversion was kicked and so Morley took the lead for the first time; 5-7.

A following large spell of the half went by with no score being recorded, as both teams struggled to get over the gain line. However, Yarnbury eventually found the formula to making meters, as they picked and drove all the way from the half way line to within five meters (Luke Woodend and Sam Brown making the biggest gains). However once on the try line the ball was ripped away by a Morley tackler, but it was thrown backwards and had to be touched down for a Yarnbury 5m scrum. Joe Pilling burst from the base again and further pick and drives sucked in defenders, allowing the ball to go wide to Jacob Rawson this time, who scored in the corner. Maxwell Lee made the conversion; 26 minutes in, 12-7.

Yarnbury used the boot a lot in the first half, and from yet another kick into the 22, their fullback attempted to break. A good kick chase though, saw the Morley attack pinned into their own 22, and a poor kick straight to Oscar Andrews followed. He dummied in order to beat the first man, and good support running from Dan Mitchell, allowed the fly half to dummy again and score in the corner. The conversion was missed but Yarnbury now had a 10 point lead with five minutes of the half left. One more try was scored before half time, following another Yarnbury kick into the Morley 22, the opposition were forced into kicking as they were pinned into their own defensive area. A short kick to just outside the 22, saw James Longhawn catch the ball and superbly wriggle around the first 2 defenders in close proximity. This opened up the space in front of him and he was able to score in the corner. The following conversion was missed, half time Yarnbury 22-7 Morley.

Yarnbury struggled to gain any go forward momentum in the opening 20 minutes of the second half as Morley dominated both possession and territory after the break. A couple of breaks from the away side saw Yarnbury rely on Keenan Dixon-Dyer to make a couple of wonderful last ditch tackles, and after Yarnbury would clear Morley would run the ball straight back in. Morley looked like they soon had to score, as they used their forwards to pummel their defensive line. Their prop would had looked dangerous with ball in hand since the start of the half soon made it under the posts, only to be adjudged to be held up. Minutes after the 5m scrum, he was over again, but again he was held up as Yarnbury did their upmost to protect their 17 point lead. Another 5m scrum was taken but a handling error saw the long standing attack end. Ironically it was Yarnbury who got the only score of the second half thanks to a moment of magic from Keenan Dixon-Dyer. A loose ball meant that Jamie McDonnell had to track back before passing to the fullback who burst from half way beating multiple defenders and, upon deserving a try for his efforts, he was tap tackled 5 meters out from the line. But the ball could be passed wide, where James Longhawn took on one defender before being pushed passed another by a stampede of forwards, to score in the corner. The conversion was missed, full time Yarnbury 27-7 Morley.

Man of the Match: James Longhawn – 2 tries were backed up by a good defensive performance and some stunning pieces of individual play.