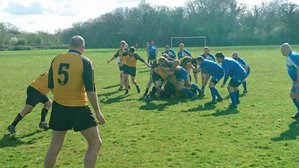 Training starting to pay off

On a glorious spring day Yate RFC welcomed Keynsham 3rds to YOSC for our 18th game of the season. Unseasonal warm weather meant that all players were going to have to work hard and regular water breaks would be needed, players could be seen to be suffering just in the warm up. Keynsham arrived with just 14 players and Tom Scott volunteered to make up the numbers by switching sides for the first half.
Yate RFC immediately got to work with some strong running and flowing rugby with good interaction between the forwards and backs. Early pressure was placed on Keynsham and with some better handling skills for the final pass could have resulted in several early tries. Yate RFC continued to pile on the pressure and were rewarded when Head Coach Dai Burgess was put through from fly half James Cannon’s pass and he strolled in unopposed under the post. James Cannon converted to set up an early 7 nil lead.
With continued pressure Keynsham were unable to force their way into Yate RFC’s half of the field and strong tackling was putting them on the back foot even when they had possession. After some strong forward runs and a break up the middle by Neil Lavelle, James Cannon was put through and went under the post for Yate RFC’s second try. An easy conversion for James Cannon made it 14 nil up.
With regular water breaks being needed it was inevitable that Keynsham would start to get some of their own pressure Near the end of the first half, with some strong runs from Tom Scott bouncing off some of his team mates and then telling them they needed to tackle him lower, Keynsham managed to get into Yate RFC’s own 22. Again strong tackling, which has been worked on each training session, was paying dividends and line speed and tackling around the ruck area was knocking Keynsham back. After a period of strong pressure from Keynsham a quick break from Yate RFC’s 22 so Craig Archer go the length of the field to score under the post. What was most pleasing to see was him being backed up by several players who tried to keep pace, noticeable Neil Lavelle whose fitness levels for a prop is amazing. Another simple conversion and at half time Yate RFC were 21 nil up.

A team talk at half time reminded all the players that this was only a job half done. With the slope in their favour and some old heads in their side we expected them to put up a hard effort in the second half. Tom Scott swapped over with Damiene Britton and the team asked Tom to provide the same hard running he did for Keynsham. Keynsham started the second half strongly and started to use big forwards to smash up the side of the rucks. Excellent positioning and tackling from all the forwards held them back and they spent nearly 10 minutes pounding the try line and also held up over the line on one occasion. Yate RFC thought they saw an opportunity to win a ruck ball and unfortunately in the process of pulling it back it went loose over the line and was pounced on by a Keynsham player; the scorer of the try after the game was revealed as Damiene Britton and he was fortunate to keep that quiet until nearly everyone had left the club house. A successful conversion saw the score as 21-7.
From on the pitch and the side line it was obvious to see the hard work in training starting to pay off. For the last few months we have shown we have the ability to score tries but needed to prevent scoring against us to get the big W. Things are starting to come together as we near to the end of our first season. Some strong running from the backs continued with Craig Archer showing up well. He made another break from deep within his own half and all expected him to repeat his first half heroics but he ran out of steam and despite some fine off-loading the referee pulled a certain try for Gary Cornish for a knock-on; the irony of this being the first pass Gary had caught in the opposition 22 all day was not lost on everyone. Some Yate RFC certainties being Bernie McMullen getting on the wrong side of the ref and getting a yellow for persistent infringements around the ruck and as he walked off he told everyone that was the first time in that half he had gone through the gate.
On the final whistle a tired but extremely happy side left the field with a great win from a game played in good spirits. Keynsham RFC were a good match for us and played the game hard and fair. In the club house a man of the match performance was awarded to Reece Villiers who tackled everything during the game, even the ref at one point. Dick of the Day despite another strong performance went to Head Coach Dai Burgess for dropping the ball, TWO times, I repeat TWO times and also failing for the second week running to get his shirt and club tie on.