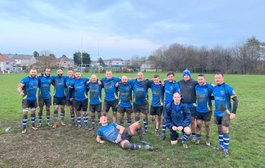 Yate RFC travelled to Whitehall RFC 2s for a last minute friendly after original opponents Cheltenham Civil Service RFC had to cancel late in the week. At the start of the season the Yate RFC Board, in conjunction with the coaching staff, made a conscious decision that with a large playing squad that friendlies would always be used to give game time to players not getting a lot of playing minutes and as such we travelled with a weakened side. It was with dismay to those in the changing room that several late call offs due to either family issues or late work commitments that we found ourselves with just 13 players with 15 minutes to go before kick-off and then 14 when our welsh wizard Craig Archer was prepared to face the wrath of his better half and arrived to play with 5 minutes to go to kick-off. This lack of players was made worse on looking up the field to watch Whitehall warming up with a large squad in their training tops with a splattering of first team players in their ranks. As the warm up continued in the wet and cold conditions skipper Jordan Hawker tweaked a hamstring but with a bit of deep heat took to the field. Credit to Whitehall who lent us Ben Scull before the game and we promptly put him in as flanker (new position for Scully?). The team talk was about fronting up and making sure regardless of numbers or opposition that we showed good spirit and kept trying to play the Yate way.

From the kick off the Whitehall RFC second row took the ball from kick off and broke the defence only to be called for crossing and a penalty to Yate RFC. Was this going to be the way of the game? A bit of luck against a side that looked physically bigger and stronger than the Yate RFC that took the field? After some early pressure Yate succumbed to big heavy running direct into the defence to concede the first try. As we gathered around the post you could see that we were very much up for the battle and Craig Archer said let’s get the ball out and we can score as many tries as them. After a second quick try for Whitehall we could have been looking down the barrel of a big loss and if we are all honest most of us thought that. Some several plays later it happened and Craig Archer got the first of his four tries of the day and we could see that whilst we may not be able to win we could give a good account of ourselves. With about 10 minutes gone James Cannon arrived and took the field so Ben Scull could re-join his team only for the next play for skipper Jordan Hawker to succumb to his injury and leave the field. A call for any front row forwards and none available in Whitehall’s ranks led to Ben Scull retaking the field for Yate RFC, but now as prop as the scrums became uncontested; was this a blessing in disguise for Yate? Of course it was. with a weakened pack, no replacements and giving away at least a stone if not two per man in the pack I feel we would have been dominated at this aspect of the game. Whilst this part of the game may have evened out the rucks were proving hard, defence around the rucks again very hard given the wet and muddy conditions and the abrasiveness of the Whitehall pack. Another late arrival was Evan Demonick and he was put on the field straight away with Scully sent back to Whitehall and he then promptly took the field for them and scored a try. From this point on the 15 Yate RFC players played the full game between them without any replacements whilst Whitehall used replacements and some of them rolling on and off which gives more credit to the final score.

It was sometime around this point that the author of this match report lost all facts about the match (doing 80 minutes at 54 years old in your first game of the season does that to you) and between the players talking we could not tell you who and when players scored so the rest of the report is a summary of facts, funnies and praise.

Craig Archer scored 4 tries and Evan Demonick scored two. Most of these tries came from fast flowing rugby with especially good hands and support in the conditions. Rhys Summerville who is a real find at scrum half with quick thinking took a quick penalty in Whitehall’s 22 to snipe in for a try. James cannon kicked 3 of the conversions. Craig Archer in scoring these tries passed a hundred points for a season, the first time this has been done by a Yate player and we haven’t reached Christmas yet. Evan Demonick passed 50 points for the club in only his seventh game.

With 8 minutes to go Yate RFC were two scores up but most of the team were unaware of this and there was some strange looks as Whitehall scored their second to last try and made a quick drop goal conversion which missed than ran back for the restart. At this point someone pointed out it was close but we were still unaware we were leading. They scored again and I think most of the team thought we had a brave loss to a very good team. On the final whistle straight after that score we asked the ref for the score and he said 41 points to 37 to which someone said ‘we ran them close’ and he then said it was 41 to us. Such was the uncompromising and ferocious nature of the attacks by Whitehall and the amount of time they spent in our half we would not have been disappointed in a valiant defeat but the fact we won this game must go down as one of the best victories in the club’s short history given the circumstances, the lack of players and the quality of the opposition.

During the game as we went down for a scrum the chairman asked the ref to stop so a dead rat could be removed! Don’t see that often on a rugby field. We only managed to lose one line out early on and with a make shift pack still managed to secure good ball from the top. This is credit to the skills of Stew Stacey and some good line out throwing by Damiene Britton. We even managed a trick front ball from a line out which might have come off if Mark Summerville had been able to move his feet out of the bog he was stood in. The defence was on top of the game and Bry Finch, Jon Muckle and Simon Wood standing out. Rich King in his first season of rugby is going from strength to strength and this was his best performance thus far. Liam Summerville came in to flanker from his usual full back position and showed the same tackling and bravery he does every week chopping down players twice his size. As previously said the club veteran player Mark Summerville managed 80 minutes of rugby in his first match this season and even managed to throw enough dummies to keep Mothercare happy even if he no longer has the pace to make any use of the space they create. It is worth a mention for most of the game the 7, 8, 9 positions were all Summerville, with ‘the Judge’ Mark at 8, Liam his son at 7 and his nephew Rhys at 9. We all know Yate prides itself as a family club but this is maybe taking it too far.

In the back line Craig Archer and Evan Demonick were their usually destructive and efficient runners as always, Rhys Summerville bossed the 9 position and when we had position distributed it well. James Williams is a steady influence at fly half and kept the back line moving with simple rugby and Gary Cornish on the wing was unlucky on several occasions not to get his name on the score sheet. James Cannon took over at full back from Liam Summerville and his interventions into the line looked like a Ford/Farrell England partnership between himself and James Williams. A special mention in this report must go to James Falconer who apart from his play on the pitch stepped in as skipper when Jordan Hawker departed. His positive words when Whitehall scored or put us under pressure were appreciated by all the team and the way he conducted himself with the referee showed real maturity. The best part of his captaincy was his diplomatic words when Jon Muckle decided he wanted to end the game early and go for a shower to warm himself up and even after Jon decided to play on he could be seen making sure his head was still in it. Whilst on about the referee, you could tell he officiates at a higher level and it was appreciated that he allowed the game to flow and allowed some of the more minor things to go unpunished due to the playing ability of those on the field which made it a much more enjoyable game.

At the end of the game a 41 points to 37 win away to a very strong Whitehall side, with a lot of first team players, was a credit to all 15 players that took the field. You could have given Man of the match to any of the players and votes from players went to several from Mark Summerville with a sympathy vote for lasting 80 minutes, Rhys Summerville for his play from 9, James Falconer for his all round play and captaincy, Craig Archer for his 4 tries, but in the end it went to Rich King who week in and week out in training gives a 100% in trying to learn the game and is always asking and listening for advice and showed this on the field with his tireless work in what is his first full 80 minutes in a Yate shirt. Dick of the Day went to someone who fancied an early shower but also gave his heart and soul out on the pitch Jon Muckle. Back to league action next week and all places on the pitch are up for grabs although this writer is happy to give the 8 shirt up until a vets game comes along. #UptheYate