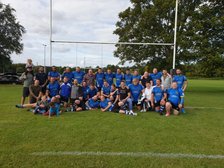 After some hard pre-season games against teams fielding first and second team players against us we set to work for a first league game. A run out against local neighbours Wotton RFC who, since the clubs inception, have proved to be a good challenge, sporting in both victory and defeat, and showing true rugby spirit where players from both sides have turned out for each other when short of players. The pitch freshly cut and marked looked in good condition, from afar, until closer inspection showed several holes made by the hot and dry summer weather. An army of volunteers, well 6 of us, then grabbed a dustbin of sand and walked around the pitch filling in holes to make the pitch safe to play on.

At the toss Captain Neil olive decided to play as he put it, up the slope, to ensure that in the second half fitness must show.
From the kick off both sides hit tackles hard and you could tell it would be an evenly matched game. Wotton would look to dominate in the pack with what could be seen as a bigger and less mobile pack and Yate would try to get the ball out to the backs as much as possible to use the speed of the back line. With a lot of experience and those considered first choice players not available (NB: after this performance some will need to fight their way back in) Yate were under pressure at scrums and line outs. Some hard great tackling was being put in and Yate, right on the edge of the off-side line, or over it if you took the view of Wotton supporters on the side, were holding their own. In the first couple of minutes Gary Cornish, covering the full back position took a kick over the back and then shocked everyone, including himself, to strike a ball with his left foot some 50 metres down the line. A skill we have not seen in the last two years. Yate applied some early pressure and based themselves in the Wotton half but hard tackling resulted in several early injuries, notably to James Falconer who was having a storming start in the centre, which resulted in a quick re-shuffle. On the 15 minute mark Wotton from a kick over the top and collected ran in their first try. A good conversion saw Yate 7- nil down despite early dominance. During the first half we saw Craig Archer showing silky running skills he is known for but has now found an additional skill, he is starting to pass.

At about the 26 minute mark with Wotton starting to apply pressure a quick tap and go saw them score their second try. Again a very good conversion saw them stretch their lead to 14 points. Yate now looked under pressure and visions of a heavy defeat was starting to worry the large numbers who came to support them. Some great tackling from all the team but noticeable, Steve Day, Neil Lavelle, Jordan Hawker, Jack Dutton and the ever reliable newly appointed vice captain Liam Summerville were preventing further scores. On the 30 minute Yate pushed a ball quickly wide and a final pass from Liam Summerville saw Jay Lythe score in the corner. A wide out difficult conversion was slotted effortlessly by Nick Dury to bring the score to within 7. Yate now looked more confident and 2 minutes later Kieran Webb, playing in the unusually position of No8 due to lack of forwards, chipped over the Wotton defence and collecting his own ball ran through for a try. An easier conversion and scores all level and Yate now looking to take control. With Yate now getting penalties a kick to touch to put more pressure on Wotton was missed by Nick Dury and from the resulting counter attack saw Wotton in Yate’s 22. Wotton now starting to look to use their pack more got a series of penalties and scrums near Yate’s line. Several times the ref indicated the ball held up over the line. Unable to hold in the scrums, and with desperate tackles to try and go in level at half time Yate tried everything but succumbed to the pressure and another converted try saw the half time lead to Wotton of 21-14.

Halt time talk was about the Captain’s decision to be fitter than Wotton and apply pressure and we needed to get off to a good start. But early on a good attack saw a break from Wotton from their half and a converted try to make the score 28 -14. Yate now threw everything at Wotton, breaks from skipper Neil Olive although to be brought down 5 metres out from the full back, smashing runs from Jay Lythe and Craig Archer, Neil Lavelle showing what was missed last season. Simon Wood and Martin Moorhouse hitting tackles and turning over ball and players injured getting back on to support the team as interchanges happened. James Falconer came back on, even though injured, players swapped between forward and backs with Steve Day going from centre to back row, Kieran Webb moving to 10 and Nick Dury moving into to scrum half. Kieran Webb, back in union after a spell playing rugby league was looking to move the Wotton defence around and a bit of magic saw him beat 5 players with a shuffle of the hips, incredible skills and going in under the posts. What he did only he knows but he dropped the ball on what would be an easy 7 points and with the dominace we had surely pushing for a share of the spoils. This set back didn’t stop Yate pushing to the end and when the ref blew for full time a 14 point loss for the first league game was not what we wanted.

Credited to all the Yate players who took the field as commitment and tackling was top draw (same for all the Wotton players who showed commitment and skills in equal measures) and it was hard to pick out a man of the match but the honours went to Jay Lythe for his all around running and work around the field. Do I really have to say who was DOD but if you can look like Barry John one minute and then look more like Barry Chuckle the next you need to be DOD Kieran (For those not old enough I will explain who Barry John is over a pint)