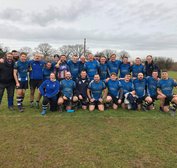 Yate RFC welcomed Bristol Saracens III for their league fixture on what was a very soggy Saturday in February.

It seemed conditions were already playing a huge part on proceedings, mixing that with the previous league defeat by the day’s opponents still very fresh in the mind. The Yate players had trained hard in the mid-week session for all for all things Rugby.

Coaches Moorhouse and Cannon had the delight being able to select from a consistent bunch of players. Yate were able to pick of one of the strongest match day squads of the season so far. So from the start it felt we had already had the edge over our opponents.

The game kicked off and Saracens immediately started where they left off from the previous game. Big barrelling runs from the heavy set front five, this caught Yate off guard which inevitably lead to Saracens first try. Their second coming off some sloppy line out defence and napping badgers at the rear of the Yates defensive set. This was the wake up that Yate needed with Coach Martin Moorhouse assuring his team to stick to the systems we practice each week in practice. Repetition! Repetition! This was to prove decisive with Yate starting to dominate possession with the Marmite James Falconer used as huge battering ram in midfield Yate Started to gain Territory. With the silky skills from Fly Half James Cannon, Yate were 10 meters out with an attacking scrum. With quick hard running from the Back row, Moorhouse and Big Stewart Stacey secured the ball, the ever youthful looking Matt Davis whipped the ball to Cannon and with a quick set of hands from the backs Welsh speedster Craig Archer was over for his first try of the day duly converted by Cannon. This was to be the influential 10’s last contribution of the day as having to go off due to injury. However Young Liam “beardy” Summerville slotted right in at 10. Yate now feeling that Saracens had shown their hand to soon, decided start to turn up the gas. With darting runs from Skipper Neil Olive and the power of newcomer Steve Summerhayes shining bright. A penalty was awarded right in front of the sticks to be converted by Olive bringing yate within 4 points of a tiring Saracens side. Constant pressure late in the first half from the ferocious front row runners Hawker and Pee Pee led to a line on 5 meters out from their opponents try line. The call was made and although it went slightly askew Moorhouse jumped like a gazelle to claim the ball and set the driving maul up. The impressive Yate forwards drove for the line so when Captain Neil Olive broke away to jink his way over for the try and convert it Yate were in the lead at Half time 17-14.
Now yate were afforded the luxury of substituting Moorhouse for the Peter Pan of local rugby Bernie McMullen. His presence was immediately felt, his on field presence and powerful kicking performances of the past put to the back his mind. His disruption at the breakdown led Jack Dutton to speed off for another solo wonder try to be converted by the ever youthful Bernie. From the restart Yate soaked everything up Saracens threw at them. Solid defence from Subs Jay Lythe, Gary Cornish and Judo Matt led to Yate turning the ball over and Summerville’s distribution being spot on for Craig Archer to go in for his second of the day. Skipper Neil Olive showed a full set of skills he has in the locker with also converting 3 magnificent penalties during the game. The final score 37-14 was a great result and reward for all the hard work everyone is doing at Yate RFC.