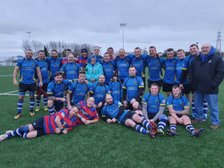 Yate continue to pile on points

Yate RFC travelled to North Bristol RFC 2s to play a league game on the all-weather pitch. North Bristol had a couple of front row call ups to their first XV and had no other replacements so to ensure we had a game with contested scrums and evenly matched teams we lent them Will Mace and the returning Steve Summerhayes for the full 80 minutes. They also borrowed Rory Sheppard from Old Colstonians RFC to complete their front row. Yate were by no means at full strength with the vice-Captain Jordan Hawker out with injury, big carrying Karl Hancock not available and centres Evan Demonick and Kurtis Moreton not available. With centre James falconer running late due to work commitments we had to start the game with an experienced pair in that position of Craig Archer and Gary Cornish.

Having suffered a pre-season loss to North Bristol RFC on the same surface Yate were keen to start off quickly. From the kick off straight into the hands of Steve Summerhayes he took the ball into contact. From the resulting ruck the scrum half took his time to pick up and his pass to the fly half was intercepted by James Cannon who ran in under the post. A simple conversion and Yate were 7 nil up within the first minute of the game. If we then thought it was going to be an easy game we came in for a shock as North Bristol started to put pressure on the Yate line. After a sustained period of pressure and a couple of missed tackles they broke the line and scored under the post. A simple conversion to put scores back even at 7 all. Nearly immediately from the restart Yate re-gathered the ball and after several quick phases it landed in the hands of Craig Archer. He scored what for him was an uncharacteristic try in that he had 3 players on him instead of his usual sprinting away and he used all his strength to drive himself over. Another conversion from cannon and the 7 point lead was restored. Yate then had a period of pressure and giving North Bristol the respect they deserved we attempted a penalty kick in the blustery conditions. The kick from Cannon fell short but the game plan to build a lead before becoming expansive was there for all to see. North Bristol again put pressure on Yate’s line and from a rolling maul drove over to score wide out. A missed conversion and the gap was back to 2 points.

Yate again tried to get some pressure on North Bristol, something they were finding difficult to do, but from another penalty award just inside the 22 Cannon slotted over the kick to take the lead to 17 points to 12. More pressure was then put on North Bristol and an award in front of the post on what would have been an easy 3 points was quickly tapped by Cannon who fed Neil Lavelle who drove over for a try. With the windy conditions the conversion was missed but now Yate had a 10 point lead. To their credit the weakened North Bristol side came back at us. After a couple of penalties awarded five metres out, a quick tap was put into the hands of their big centre, who did most of the damage to us in the pre-season game, to score his second try. An easy conversion and back to a close game. As happened previously, Yate came straight back into it and from the restart a dropped ball resulted in a scrum to Yate which having secured it came back into the hands of Craig Archer who ran in under the post for his second try just on the whistle for half time. An easy conversion for Cannon and Yate had a 29 points to 19 half time lead.

Several changes were made at half time to strengthen the side and a stern if surprising calm talking to the players from coach Martin Moorhouse and skipper Neil Olive about playing structures and not getting sucked into North Bristol’s game was given. The team were reminded about training and what was expected.
The second half started with Yate more in control of the game and after some pressure a poor defensive clearance from North Bristol’s full back was taken by Yate’s full back Liam Summerville on the 10 metre line. Showing a good turn of pace he beat 4 players to score out wide. A difficult kick in the conditions was missed by Cannon and the lead went to 34 points to 19. Yate now started to relax a bit and get the balls moving through the hands. With the returning skipper Neil Olive playing back at 8 and picking up and running at the defence causing problems to a North Bristol team who were starting to fall off tackles Yate started to look more like the top of the table team. From one such scrum Olive picked up and went blind and drew in the defence to offload to scrum half Rhys Summerville who ran in another try. A simple conversion and now 39 points to 19 up. Yate now made changes to ensure all the replacements got game time by either taking the field for Yate or as injury replacements for North Bristol. The blind side pick up again was tried from a scrum and Olive again passed to Rhys Summerville who fed the supporting James Cannon who went in for his second try under the post. Another successful conversion and now moved on to 46 points. The next try again came from a scrum pick up by Olive at 8 which again ended up in the hands of James Cannon who having seen a big gap in the channel sped through, showing the speed that once had him as a winger with Bristol colts to go in from nearly 40 metres out. He slotted the conversion and Yate now over the half century and had a 53 points to 19 lead.

With North Bristol visibly tiring Yate tried to inflict more misery on them and prop Jon Muckle got in on the act by running in from the edge of the 22 to record his first try for the club. A more difficult kick wide out was missed by Cannon. James Cannon was now bossing the game and seemed on a mission to score as many tries as he could. He this time saw a gap when on the half way line and sped away from the defence to score his third try and another easy conversion. With time running out Cannon again scored a solo try and with his conversion recorded a club record haul of 37 points in a game. With the game coming to time with Yate now 72 points to 19 up North Bristol disappointingly had the last say when again some poor tackling allowed their centre to go in under the post. Their fly half then had the cheekiest of conversions as he did a backward drop kick off his heel to score; very classy. The official called time after the kick to see a 72 points to 26 win for Yate. In all honesty the score does not truly reflect the game as North Bristol did put a lot of pressure on in Yate’s 22 and seemed to have more sustained periods in Yate’s 22 than in their own. The difference in the teams seemed to be Yate’s ability to score from far out and from all different players, plus some poor tackling in the second half by a tired team.

During the game Neil Olive recorded his 100th point for the club, not all tries, and the skipper will tell you he still has a 100% kicking record. As said James Cannon recorded the highest individual points total in a game for Yate and also passed one hundred points for the season. Surprisingly given James Cannon’s record haul several votes for man of the match went to other players and Rhys Summerville, Reece Villiers, Matt Davies and Craig Archer all got votes however there was only going to be one winner on this day and Cannon thoroughly deserved the award. He said after this artificial surface suits him and allows him to open his legs or maybe he is just getting old and can only do it every other game?