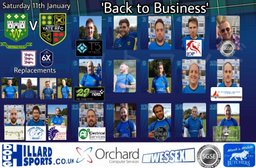 Yate RFC away at Whitehall 2s

Yate RFC travelled to Whitehall RFC 2s for our first league fixture of the New Year. After defeating Whitehall at the start of the season and again when we had a weakened side in a friendly before Christmas we knew that they would be determined to put on a good performance and stop us making it three from three this year. The pitch was in a lot better condition than the last time we met but for those that have been to both games that isn’t much of an improvement. Thick mud in some places and heavy conditions and the only redeeming feature of the day was not having standing water on it. Whitehall were dealt a blow before the game when several of their players were called up for their first XV and this initially left them with very little cover. As often before we offered them replacements if needed.

Kicking up hill and into a good stiff breeze Yate started off strongly with ball in hand and some good runs by Craig Archer. Chairman Stewart Stacey was playing Fijian rugby with some good off loads but the moves kept seeming to breakdown with the vital last pass. Whitehall seemed determined to stop Archer and appeared to have learnt lesson from previous games and were quick to get tackles in on him. On a couple of times when it appeared he may make a break he was cut down with some strong and aggressive tackling and the whoops and support for the tacklers from the Whitehall side showed how determined and up for the game they were. After one storming run from Jordan Hawker an infringement at the ruck was penalised by the official and although only three minutes into the game there was an immediate signal to go for the post. Yate were determined to settle into the game and get points on the board and stem the enthusiasm of the Whitehall side. The usual dependant boot of James Cannon, whilst he was kicking into the strong breeze, would have normally made the kick from 30 metres out but surprisingly he put it wide of the right hand upright. This seemed to force Whitehall into more aggressive tackling and this wasn’t being helped by some poor handling by several Yate players. With 12 minutes gone, Whitehall were putting some pressure on Yate when Evan Demonick failed to release the ball in a tackle and was penalised. The kick just 35 metres out, but right in front of the post and with the wind behind him was put through the middle by the Whitehall fly half to put them 3 nil up. Whitehall continued to pressurise again from the kick off and 5 minutes later again were awarded a penalty in the 22 for offside in the midfield. A very simple kick saw Yate slip to a six point deficit. Again from the kick off Yate were again the architects of their own down fall. Having played a bit of good rugby they gave the ball away to easily in the Whitehall half and then inexplicably, several players failed to put a tackle in on a player who should have not been allowed to get around the outside and which allowed him to kick ahead. With Craig Archer winning the race to the ball the danger appeared over, but as it was reaching the line, the Whitehall winger managed to get a dive in before him and touch it down. The conversion was missed to all those on the side line watching and signalled as such by the touch judges but on speaking to the official at half time he gave the kick as good and Whitehall were in a 13 point lead. Whilst Yate were putting in lots of errors this was not an undeserved lead as Whitehall were certainly showing what a good side they are.

Yate needed a response and with 8 minutes to go to half time an attacking scrum to Yate in Whitehall’s 22 was fed out to James Cannon who put Evan Demonick on a straight run at the defence. He eased past a couple players, with one from a dazzling side step, to go under the post. A simple conversion from James Cannon had Yate on the board but still 13 – 7 down. Easing into half time, with the thought that going downhill and with the wind we could take the game, the coach and team manager expected some easy decisions on how to change things up but, with the final play of the first half, after several penalty decisions against us in our own 22 which were all played quickly by Whitehall, they crossed the line again. What should have been an easy conversion was put against the left hand upright and Whitehall had an 18 points to 7 lead.

At half time the message was about what we had done to them previously, the wind in our favour and downhill but more importantly go out and earn the win and don’t expect it. Nothing is ever easy at Whitehall. Along with the positive messages some home truths about what was needed from the team was said and several changes were made including the welcome return from injuries to the forward pack for Matt Hope and Karl Hancock.

Straight from the kick off Yate started to put pressure on and appeared a different side. In Whitehall’s 22, after several penalty awards, the match official called forward their flanker for a talking too who then for some reason decided to tell the official how he had it wrong. Only one outcome from that type of behaviour and he went for a 10 minute rest. Surprisingly James Cannon missed what would normally be a routine kick for him. This miss was soon put to one side a couple of minutes later when Nick Dury decided to snipe down the blind side from a scrum in the Whitehall half. Having drawn the winger he passed to the supporting Craig Archer who raced past the fullback to score a try. Again what should have been an easy conversion for James Cannon was missed. Yate although still losing on the scoreboard were on the ascendency and on a Whitehall put in at a scrum on their own 22 metre line, Yate put so much pressure on the ball it shot out the side of the Whitehall scrum. Reece Villars darted off from the side of the scrum and pounced on the ball. From the ruck that followed Nick Dury again took the decision to make a sniping run and having beaten a couple of players was tapped tackled. As he hit the floor he popped up a gentle little pass to James Cannon who put the after burners on to run in another try. Cannon then again failed to convert his own try. This was now 10 points missed from the boot and left Whitehall still leading by one.

At this point it still looked like Yate had enough in the locker to take the game but Whitehall continued to spend time in Yate’s half, but with a lot less frequency than the first half. In one period after a number of penalty awards they took the option to go for post to try and extend their lead. Their fly half then found the same issues kicking into a wind when his kick from less than 30 metres out fell short. With 15 minutes to play Yate again put pressure on Whitehall’s line and in attempt to slow the play down their hooker reached over the ruck and played Nick Dury as he picked up the ball. With penalties mounting up the official again reached for his pocket to issue his second yellow of the day. With Yate again a man up they continued to try and force the game and from the back of one of several rucks the most unlikely of players, Craig Archer, picked up and drove himself over with a couple of players on him for his second of the game and Yate’s fourth. A simple conversion (if there was one in this game) was put between the post and Yate took the lead for the first time. With less than 10 minutes left Yate still did not look guaranteed the win and kept pushing to give a bit of breathing space. With Whitehall trying to move the ball quickly Yate took the opportunity to isolate one of their players at a ruck and overturn the ball. Karl Hancock picked up and went blind and with three players trying to bring him down he passed out of the tackle to the midfield work horse James Falconer to run in and score under the post. With James Cannon hitting the conversion Yate could now rest easy with a 31 point to 18 lead. The game ended with no more scores and saw Yate record their third victory against Whitehall this season.

I think if at the start of the season if we had been told we would record one victory against a side as strong as Whitehall we would have been proud of our achievements but to make it three from three shows the progress of the team. Some strong performances on the pitch with again the midfield partnership of Demonick and Falconer letting very little through whilst always being a threat. Vice-Captain Jordan Hawker on his 50th appearance had some barn storming runs and was solid in the scrums. The man of the match went to Nick Dury, a player who was due to be replaced at 50 minutes but the ten minutes after the half time break drew a re-think with his sometime maverick attitude to game play and with sniping runs keeping Whitehall on the back foot. Next week we have a top of the table clash at home with Avonmouth who will be out to avenge the defeat we inflicted on them at the start of the season #UptheYate