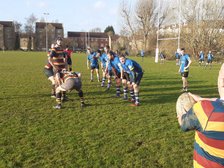 Evan Almighty goes on the rampage and walks on water

Yate RFC travelled down to Bedminster to play a league game against Broad Plain RFC 2s. As with a lot of teams at present Broad Plain were struggling with numbers and had a bare 15 to start the game. Yate had a strong team out with selection for places now being fiercely contested and it was good to see that those that had not been selected in the match day 22 came along to support the team. A bad injury to last weeks starting fly half James Williams against HMP Bristol and with regular fly half James Cannon on the bench due to just getting over some mid-season surgery to improve his looks, Liam Summerville had to step up from full back to play 10. The rest of the team looked strong right across the park and we saw the welcome return of Kurtis Moreton to the bench to bolster the back line if needed. As to be expected from any visit to broad plain we expected a good forward battle.

With a strong wind going straight down the pitch Yate RFC were forced to start the game into the full force of it. From the first kick Broad Plain’s hooker knocked on but picked up the ball and ran through only to be tackled by Ryan Holloway as the official blew his whistle. The result of the tackle was an injury preventing him returning to the pitch and Yate in the spirit of the sport lent Broad Plain Will Mace from our replacements to go in as hooker until some of their own replacements turned up. The opening minutes of the game had Broad Plain picking up and driving around rucks and keeping the game tight and hardly using their back line. Yate’s defence around the ruck was good and well organised and whilst they kept driving in they were getting very little out of it. From one early drive in Yate’s 22 the ball came lose for Yate’s second row Ollie King to pick up and run forward. He broke the line and kept running into the strong wind all the way to close to Broad plain’s 22 only for him to be tackled and knock the ball forward. Whilst disappointing it showed Yate that with the ball they could make metres and break the gain line. Yate now started to get some possession in Broad Plains half and around the 12 minute mark as Broad Plain tried to drive out of their own half Reece Villiers came in with a crunching tackle which dislodged the ball. It was quickly picked up and sent out to Evan Demonick who pinned back his ears and sprinted around past the winger and full back to score 5 metres out from the touch line. With no regular kicker in the side the kicking tee was sent on and Demonick was asked to kick what was a difficult kick into a strong wind. Knowing his previous past as a schoolboy footballer of some note we knew he had the eye to foot coordination to strike a ball well but was this too much to ask? He took a leisurely run up in his laid back style and with a simple swing of his right boot sent the ball sailing through the middle of the post. Looks from the side line said it all and we had found ourselves another reliable kicker. Is there anything this man can’t do?

The game continued to stay tight and Yate’s forwards were working hard at rucks to compete and secure ball. After several quick rucks and drives up the side of each of them, scrum half Rhys Summerville span the ball down the back line. It went quickly through the hands to give the prolific Craig Archer a one on one near the half way line with his opposite number. It is rare at this level for him to miss out on that kind of opportunity and he eased past the winger and then the full back to run in under the post. A lot easier kick for Demonick and Yate now in a 14 point lead with 20 minutes of the game gone. Just after the score Yate’s skipper Jordan Hawker went down injured. A lot of pointing to the Yate social media team who must have jinxed him with their post on how his chocolate ankles had mended. Luckily Will Mace had been handed back to us by Broad Plain and he went on as a temporary replacement at prop.

The next try came again from good work by the pack to set up the platform for the backs to use. The ball was fed from a ruck to Liam Summerville who eased past a couple of tackles and as he went into contact laid off a little pop pass to the supporting Evan Demonick at full pace. He again showed a fleet foot to the covering defence and ran in for Yate’s third try of the game. Another difficult kick was easily despatched by Demonick and Yate now 21 points up. Just a minute later Yate got their fourth try of the game when Craig Archer took the ball behind the gain line and ran straight at the heart of Broad Plain’s midfield. As he often does he broke free of several attempted tackles and sprinted away under the post. A much simpler conversion for Demonick this time and Yate now 28 points up with just half an hour on the clock.

As expected Broad Plain continued to battle it out and after having a period of possession in Yate’s 22 they kept driving around the fringes of the rucks. Yate kept them at bay for several minutes with a really well organised defensive set up but eventually a try came far out to the right of their post to put Broad plain on the score sheet. A missed conversion and Yate now 28 points to 5 up. With half time looming Yate kept moving the play from side to side of the pitch, retaining possession and looking for openings. With the defence coming up fast Liam Summerville saw a gap and moved through it to break the gain line, he drew the full back and with the supporting Evan Demonick as always on his shoulder he popped it out for a simple run in. Another conversion and Yate now 35 points to 5 up and the half time whistle blown.
At half time changes were made to the Yate side to again allow all the players as much game time as possible. James Cannon came on but went to full back to allow Liam Summerville to continue to get used to a position he is unfamiliar with, Kurtis Moreton made a welcome return to the field. Rich King who improves from game to game was replaced by Tom Scott in the second row. Jordan Hawker having had a rest returned back as prop. Half time talk was about continuing to play to the game plan and to look to execute the moves practiced in training. Although Yate are not usually a kick and chase team the strong wind across the pitch would have been an advantage if mother-nature had felt like obliging but, what had started as strong gust, had now dropped to a light breeze.

Straight from the start of the second half Yate went straight onto the offensive and Craig Archer not wanting to be outdone by his fellow backs took the ball near the touch line on the half way line. He proceeded to dance past player after player to score what was an impossible try that only a few players have the knack or ability to score. This freak of nature just happens to be one of them and he went in for his third try. At this point Evan Demonick thought he was going to hand over kicking duties to James Cannon only to be told to continue what he was doing. Another easy conversion for Evan Demonick and Yate had 42 points on the board. Yate now made further changes with Bry Finch going on at hooker, a position he told younger squad members he used to play when they were still at school, club coach Martin Moorhouse coming on to replace Ryan Holloway who had been throwing himself into tackles all over the field and the ever youthful Bernie McMullen coming on to replace Karl Hancock at 8. The final replacement was Jim Morgan getting onto the wing to see if for once he could get his match day kit dirty. At the same time we started to lend players to Broad Plain as injuries started to hit them and by the end of the game we had Will Mace, Gary Cornish and Matt Davies in their ranks.

Yate’s next try came after some Broad Plain pressure in Yate’s 22 when another crunching tackle dislodged the ball in contact and was picked up by Evan Demonick. As he sprinted away he seemed to toy with those chasing him just leaving just enough gap to keep them interested as he went in under the post for his fourth try. He kept his 100% kicking intact with another successful conversion. This try again spurred Craig Archer not to be up staged and he went off on another run from his own half and scored his fourth try and set up an 8th conversion. It would be wrong to say Broad Plain were now dispirited as they continued to put up a good scrap but the pressure was telling on nearly every play. With Yate putting pressure on their line they attempted to clear with a kick only for it to be half charged down. The ball bounced nicely into the hands of Jordan Hawker who had a simple run in under the post. Very shortly after this Neil Lavelle having seen his brother prop score decided he needed some of the action so took a ball from the back of a ruck and ran in from 15 metres out to again score under the post. Evan Demonick then slotted over his 10th conversion. As the teams went back to the restart the official called over skipper Jordan Hawker and after a quick discussion the game was ended early with over 10 minutes left to play with no benefit to either side to continue. A final score of 70 points to 5 was impressive and can only be put down to great organisation and work by the pack and a surprising amount of pace in the backline.

During the game Evan Demonick scored 40 points with 4 tries and 10 conversions and broke the individual game scoring record set by James Cannon early this year. After just 8 games for the club he is already on 95 points. Craig Archer with another 4 tries is smashing the individual try scoring records and we are just over half way through the season. We saw some really good individual performances around the park and again gives the coaching staff headaches in team selection. As could be expected Evan Demonick was voted man of the match by his fellow players whilst dick of the day went to Director of Rugby James Cannon who turned up to play minus his boots.