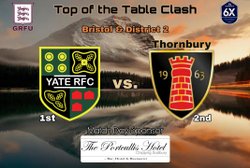 Hard fought draw in top of the table clash

Yate RFC welcomed Thornbury RFC 3s to YOSC in a top of the table clash with Yate sitting top and Thornbury second. Lots of work by the board went on behind the scenes to get this fixture on after several cancellations and Thornbury looked to be struggling with a side but were fortunate to have a cancellation of their 2s game that morning. This allowed a stronger than expected side to be brought to challenge Yate but this is to be expected with clubs with several sides and as has been said to the players on more than one occasion ‘if you want to play at a higher level you need to face better teams’. Yate had a strong squad to select from with only a few injuries to players and with starting 8 Karl Hancock already committed to playing charity rugby for the Egg Chasers in Wales unavailable for selection. Options in the second row were limited and a decision was made to start Andy Taylor in his first club start, having only just taken up the sport this year, to allow a line out target.

With storm Ciara due to hit it was surprisingly good conditions for a game of rugby and there was a large crowd from both clubs eager to see some quality rugby. From the start of the game Thornbury started strongly and launched lots of attacks testing the Yate defence. Strong tackling across the pitch including some crunching ones from flanker Ryan Holloway and centre James Falconer kept them at bay. With Thornbury hitting around the rucks and then looking to spin it wide they were testing the defensive organisation of Yate to the full, however the first try went to Yate when their Welsh flyer Craig Archer intercepted a pass near his own ten metre line and sprinted away from the defence. A conversion by James Cannon gave Yate a 7 point lead. Thornbury’s strong and organised pack were looking dominate in the set pieces and they spent the next 20 minutes camped in Yate’s half only to see the final pass not go to hand or a try saving tackle be made by a Yate player when the line was in sight. Some that come to mind was a final last ditch tackle by Andy Taylor and another by James Falconer with a tap tackle as the winger looked destined to score a try. Craig Archer was lucky not to see yellow when he tried to intercept again in his own 22 and knocked on. When chances came to ease the pressure from penalties the usual reliable James Cannon was not finding touch and the ball kept being ran back at the Yate defence. From one of Yate’s very little periods of possession in Thornbury’s half a penalty award for a high tackle allowed James Cannon to extend the lead to 10 points. The match continued with more Thornbury pressure and eventually it took its toll and from a penalty advantage at a scrum, on Yate’s five metre line, a pick up at 8 brought Thornbury’s first points. A missed conversion saw the score at 10 points to 5. From the restart Yate responded immediately when Thornbury failed to gather the kick and Reece Villars pounced on the ball supported by Neil Lavelle. Rhys Summerville was on hand to spin the ball quickly down the back line to put Kurtis Moreton with a ‘one on one’ with his opposite number which he did not pass up. The missed conversion by James Cannon was the end of a hectic first half and saw Yate lead at the break 15 points to 5.

At half time that immediate response to a Thornbury try had the Yate team on a high. The battle we expected had come and we had reacted to it and our defensive organisation and a little bit of luck was keeping us ahead. The coach asked for a big performance in the second half and skipper Neil Olive said he wanted the same commitment to tackling that had been displayed from the first minute. At half time Tom Scott who had run himself into the ground made way for veteran player Bernie McMullen who it was hoped would strengthen the scrum.

The second half started the same as much of the first half with Thornbury putting pressure on Yate and from one attack close to the line Craig Archer attempted another intercept only to knock on and the official to produce a yellow card. To be fair it was a very good decision and could have been a penalty try but the official when asked by the Thornbury captain said that there was enough cover coming across to not show it would not have been a probable try. For the elderly gentleman on the side line who decided to tell me it should have been a red card and a penalty try, I suggest he reads Law 8 which will explain it fully and to issue a red card at this level for any offence outside of foul play really would devalue the game. From the resulting penalty Thornbury called for a scrum clearly feeling their dominance in this area would pay. They used the same tactic as their first try and with again a penalty advantage at the scrum, the 8 picked up again but this time popped out to the scrum half who went in. An easy conversion and with a man advantage Thornbury were on the up despite being 15 points to 12 down. At this point it was decided to bring on Miles Hackett at scrum half for the impressive Rhys Summerville who had a great game at 9. Hackett was making a welcome return to the field after a long period away and it was felt his kicking ability at the base of rucks and scrums would bring a different dimension to the game and try to allow some territorial possession in Thornbury’s half. The next try again went to Thornbury and for the first time in over an hour of play they managed to get around the solid Yate back line defence with their big bulky outside centre finally breaking the gain line. A difficult conversion was slotted over and Thornbury took the lead for the first time 15 points to 19. The 14 points conceded whilst down to 14 men was disappointing but just goes to show what could have been if Archer had got 2 hands to the ball instead of his one out stretched one; he did make a suitable contribution to the tour pot for his indiscretion. With Thornbury not losing a ball at the scrum and always putting pressure on Yate’s ball when Jordan Hawker went down injured it would have been easy to call for uncontested scrums due to no front row cover but the little man who is a rock in the scrum Will Mace stepped up on to the field. His small size makes it a nightmare for opposition props and with Bry Finch next to him we had one of, if not the smallest front row in the league.

With Yate back up to 15 players they again responded and started to get some time near Thornbury’s 22. Yate started to use the kicking game more and several lung busting chases by players going after kicks led to fumbles or turnovers. A change in the backrow saw Ryan Holloway make way for coach Martin Moorhouse who whilst he would not bring speed to the game would bring savvy and rugby knowhow to the game. From a Yate scrum just outside the Thornbury 22 the ball was put down the back line where Evan Demonick went through a gap to score, a conversion by James Cannon saw Yate retake the lead 22 points to 19. Thornbury, as to be expected from the quality outfit they are, then responded and when a penalty was awarded for offside in the midfield, instead of going for a line out opted to kick for post to draw level. This decision again showed the respect being show by each side to each other and how close the game was. After another series of attacks by Thornbury they again were awarded a kickable penalty and they took the opportunity to go ahead with minutes on the clock. Yate then threw everything to try and get back into the game and when they were awarded a kick about 35 meters out in front of the post Skipper Neil Olive told James Cannon ‘if you think you can get it go for it, I back you’. He sent it straight through the middle to draw level 25 points all on what turned out to be the last play of the game.

As the players walked off the pitch you could see the elation in Yate who felt they had got out of jail with the result having being pushed into their own half most of the game. The result was a battle between Thornbury’s organisation and set pieces against a superb tackling defence and hardworking team ethos by Yate. The performance of all 15 players that started and the 4 replacements used was a credit to the club but it goes without saying that the result cannot be achieved without the other unused players on the bench, the supporters who push the team on and those players who at training push for a starting place. Man of the match votes were spread through several players with notable performances being James Falconer for yet again an immense defensive display, Rhys Summerville for his performance at 9, Reece Villars for his tenacity in the tackle, Neil Lavelle for doing a lot of the unseen work, Liam Summerville for another solid display at full back and for Andy Taylor completing his first full 80 minutes of rugby. But in a very close vote Ryan Holloway got the nod in what was a consummate display of tackling all around the field. The dick of the day went to one of the committee, Bernie McMullen, who doesn’t understand home and away and decided to make his way to Thornbury. The return fixture on the 28th March at Thornbury should be a cracker. Next week Yate travel to Bishopston RFC to play on the 4G pitch planning to get revenge for our only league defeat of the season. With Bishopston RFC 1s now out of the cup we expect to once again face a very strong side but as always we will play what is put in front of us.