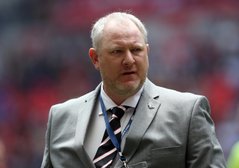 Yate Town Football Club are delighted to announce the appointment of Peter Beadle as our new First Team Manager.

Having conducted, what we feel has been a thorough application and interview process we have appointed a manager who shares in the vision and ambition of the club.

Beadle brings with him a wealth of experience in management including a playing career which features Tottenham Hotspur, AFC Bournemouth, Watford, Bristol City & Bristol Rovers on his CV.

He went into management with Taunton Town, Newport County and Clevedon before taking charge at Hereford, guiding them to the National League North via the Midland League and Southern League in which he won three consecutive league titles becoming the first Non-League side to do so.

Peter said on becoming Yate Town's First Team Manager:
"I'm delighted to take the role as manager of Yate Town FC. They are local to me and play a part in my playing history as I've played at the ground with Bristol Rovers. I know a lot of the people involved on the football side of things and I'm looking forward to getting started. I hope to build on the fantastic work that Paul and Andy did here last season".

We are also delighted that Stuart Fleetwood will continue with the club and become Peter Beadle's assistant manager.

Yate Town Director of Football Richard Thompson said on the appointment:
"The calibre of applicants was superb and we would like to thank everyone who applied. I am delighted to appoint Peter as the new first team manager, and believe he is the right man to take the club forward".