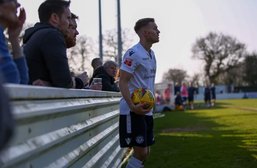 The last win at The South West Interiors Stadium came back on January 22nd while mid-table Supermarine romped into a three goal lead and had the game effectively put to bed before the break.

The customary bright opening produced early chances for Town. Joe Tumelty tested Martin Horsell with a shot from distance and James Harding should have worked the goalkeeper with a close range header following a Will Tunnicliff cross.

The home side waited unsuccessfully for a foul to be given as Tumelty was robbed of the ball on 19 minutes, and, when the pass forward sent Supermarine's Kieran Phillips free, he outpaced several hesitant defenders before shooting across Andy Hannah into the far corner.

Appeals for a penalty were then waved away when Town's Luke Hopper went down following a push in the back and when play switched to the other end, Hannah gave the ball away with a poor clearance and Phillips provided the assist for Henry Spalding to make it 2-0.

As Town hit back, Harding was played in on goal but he was soon crowded out by three defenders just inside the box before he could get his shot away.

The Swindon side got a third goal in first half stoppage time. Phillips raided down the right following another quick break and his cross into the area was headed home by Spalding.

Harry Williams and Ryan Campbell both had shots saved by Hannah as Supermarine got forward early in the second half while Yate's only notable effort on target during the whole of the second period was a Tumelty free kick which required a diving save from Horsell.

There was a flurry of late goalmouth action at both ends. Tumelty, Hopper and Mark Thuo were all blocked out by some sturdy Supermarine defending while, at the other end, Hannah had to deal with shots from Williams and substitute Zak Kotwica.

The GFA Senior Cup final against Cirencester Town at Oaklands Park on Tuesday, kick off 7.30 p.m., is followed by the trip to Poole Town on Saturday.