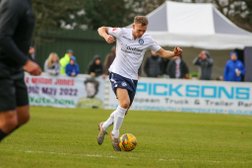 Yate well beaten by the police.

The Police produced a master class in game management and demonstrated why they look likely to be strong contenders when the end of season promotion race begins to hot up, writes John Davis.

The London-based outfit, now up into second place, moved into a two goal lead before the break and then defended in depth during the second period while improving their goal difference with two further strikes.

Town enjoyed their best spell early in the game. A Matt Bower header from a Joe Tumelty corner was blocked on a packed goal-line before Luke Hopper just over-ran the ball when he was played into space.

The visitors' Liam Ferdinand, who was to have a huge influence on the overall outcome of the game, notched the opening goal after 22 minutes when he ghosted into place on the near post to turn in a low left-wing centre from Oliver Knight.

Bower had another header saved by Liam Beach as Town tried to get back into the game and a timely last ditch tackle from Will Wickham robbed Ollie Mehew as he lined up a shot on goal.

Knight powered through to make it 2-0 soon afterwards after Ferdinand had taken the ball away from Sam Kamara in midfield and Herson Alves should have made it three moments later only to blaze the ball high and wide from close range.

For all their possession after the break and several substitutions, the home side never looked capable of breaking down the Police defence and the only real effort that produced a glimmer of hope was a long distance shot from Mehew that Beach turned over the crossbar for a corner.

Andy Hannah needed treatment after racing off his line to head the ball clear before Ferdinand netted his side's third goal with 78 minutes on the clock after a drive from Knight had been pushed out to him.

Despite being comfortably in front, Police were not satisfied and they conclusively put the game to bed with a fourth strike five minutes from time.

Substitute Jasper Mather was pushed in the back by Sam Turl inside the area and Ferdinand duly completed his hat-trick from the penalty spot despite Hannah's brave effort to keep the ball out.

Star man: Police's Liam Ferdinand (A stand-out performance from the visiting striker who proved to be a total handful throughout the game.) Attendance: 239. Entertainment rating: 4 stars.

The programme continues relentlessly with a trip to Taunton Town on Tuesday and the visit of Tiverton Town on Saturday.