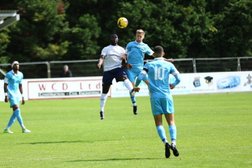 Looking for a suitable title for the league's opener? What about "A Bad Case of Deja-Vu" or "The Lerone Plummer Show: Part Two?" writes John Davis.

The Blackfield striker all but clinched his side the championship when he netted two and had two assists at the Universal Components Stadium in the 4-1 win back in April and this time he went one better, scoring a hat-trick and setting up the second goal of the game.

With Joe Guest missing through suspension, newcomer Luke Spokes started in midfield and Nick Peare dropped into the back line to cover for Josh Ford who was unavailable.

Charlie Gunson caused the home defence some problems early on with several mazy runs but it was Plummer who opened the scoring after sixteen minutes when he finished from an acute angle after he had got free on the break and Adam Forster had pushed out his first effort.

The well-organised visitors got everyone-including Plummer at times-behind the ball whenever Yate looked to get forward and Lewis Noice in the Blackfield goal enjoyed a quiet first period.

Plummer squared the ball from wide on the left for Sam Griffin to score Blackfield's second goal before Yate had their only real chance of the first half when Nick Peare's firm header from Spokes' free kick went narrowly over the top.

Jake Lee and Adam Price both went close following the re-start before the Blackfield were reduced to ten men on the hour when Adam Tomasso was shown a straight red card for a lunging tackle on Jack Twyman.

Yate took full advantage minutes later, Ollie Mehew converting from the penalty spot after Spokes had taken a tumble in the box following a challenge from Josh Harfield.

The vagaries of a football match then became self-evident. One moment Yate were almost level when Twyman's blast from distance struck the underside of the crossbar, then Plummer was racing clear at the other end to put his side 3-1 in front.

The introduction of a batch of late substitutes did little to help Yate's cause and the contest was finally closed in the last minute when the elusive Plummer out-muscled Sam Boutlon before advancing to slip the ball under Forster.

Ex-Bluebell Michael Meaker, who has recently rejoined the Somerset outfit as a coach, will be keen to do well against his old club at Taunton on Wednesday while a trip to the seaside follows on Saturday with Poole Town the opponents.