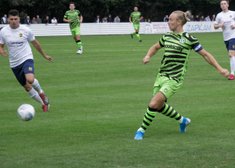 Another useful work-out against strong Football League opposition and, at least on the basis of the first half performance, the final scoreline was perhaps a little flattering to the visitors, writes John Davis.

Jack Twyman came into the starting line-up after missing the Bristol Rovers game and the substitutes included David Sims-Burgess and a number of trialists.

Rovers were quick out of the blocks and were in front after only three minutes. Aaron Collins took a pass from George Williams and cut into the box before steering his shot round Adam Forster and into the far corner.

The lead was short-lived though with Nick Peare finding Ollie Mehew free down the left and last season's top scorer curling his shot into the top corner beyond Adam Smith.

Forster did well to tip over a free kick from Williams before Yate almost took the lead themselves when Jake Lee was denied by a defender when he got on the end of a Mehew cross after some neat inter-changing.

The second half was punctuated by a large number of substitutions, Rovers making seven in all, with the visitors dominating possession and creating a hatful of chances.

After Lee had been foiled by Lewis Thomas in the Rovers' goal soon after the re-start, Williams put the League side 2-1 in front when he turned quickly in the box and a third goal soon followed when Daryll Grubb and Nathan McGinley set up a goal-scoring chance for Junior Mondal.

Joe Mills' perfectly flighted free-kick over the wall made the score 4-1, Williams got his second goal of the game after an assist from Mondal and Mills also went double when he looped the ball into the top corner of the net from an awkward angle on the left late on.