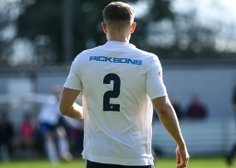 Back to back home defeats for Yate

The fact that Tiverton played for over half the game with ten men seemed to make little difference as the visitors, always strong and well-organised with Gary Warren in charge at the back, took all three points with a break-away goal ten minutes from time.

Both sides made a tentative start and it was home 'keeper Andy Hannah who was first into action when he had to deal with a powerful drive from Chris Shepherd.

Town then won a series of corners and free kicks on the edge of the box after good attacking moves, but the opportunities were wasted with poor deliveries that often failed to beat the first defender yet alone provide work for visiting goalkeeper Lewis Williams.

Tiverton edged in front after twenty minutes. Theo Simpson's low cross from the right reached Dan Hayfield and, after his first effort had been blocked, he drilled the rebound into the far corner.

Shepherd then had another effort saved by Hannah before the visitors went down to ten men when full back Craig Woodman picked up his second yellow card of the game following a foul on Sam Turl.

Yate capitalised with an equaliser immediately. Turl used his strength to get free on the right and when the ball into the danger zone finally reached James Harding he lifted it into the roof of the net from close range.

A second home goal almost followed. Ollie Mehew outpaced several defenders in a mazy run from midfield just before the break but his final shot on goal lacked power and Williams got down well to save with his outstretched foot.

Chances were rare during an even second half but Mehew should have hit the target in the 70th minute when Andy Lewis and Harding had set him up with a clear sight of goal.

A draw then looked the most likely outcome but with ten minutes left Hayfield got round the back of the Town defence and his cross into the goalmouth was turned in on the near post by the more alert Andrew Watkins.

Star man: Sam Turl (Always strong in the tackle and made some of the best attacking runs especially in the first half.) Attendance: 280. Entertainment rating: 3 stars.

Next up is the visit to bottom of the table Wimborne Town on Tuesday followed by a home meeting with promotion hopefuls Farnborough on Saturday.