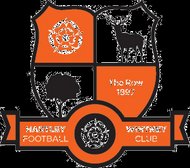 First home win of the season, as Yate lift themselves off the bottom of the table.

Not a game for the fainthearted. End to end football, a disputed goal, a late dismissal, a stoppage winner and enough cards to stock a branch of W H Smiths, writes John Davis.

No matter. The result was the thing and the three points lifted the side off the bottom of the table and provided a morale boosting win going into the weekend.

Reduced to ten men in the closing minutes after Bradley Webb had picked up a second yellow card, Sam Kamara intercepted the ball in midfield, slid a pass through to Louis Britton and the Bristol City loanee went on to drill in the deciding goal.

A bright opening from the home side, which displayed much more intensity and purpose than of late, created the better chances in the first half although the visitors always caused concerns in the box whenever they won a corner or a free kick.

Britton was just wide when he tried to lob the Hartley Wintney goalkeeper, Grant Horton got forward to volley wide and a low shot from Joe Guest was held by Tom Williams.

The pressure was finally rewarded midway through the half when the visitors' defence failed to deal with a corner and Britton found space on the far post to touch the ball in.

The Hampshire side levelled minutes into the second half, an assistant helping the referee to judge that an Adam Cornell effort had crossed the line after several previous efforts had been blocked in a packed goalmouth.

Immediately Britton was denied by the legs of Williams as Yate countered and soon afterwards Luke Spokes rounded several defenders in a mazy run before blasting the ball straight at the goalkeeper.

Adam Forster was then forced into some strong saves, notably from Jack Ball and Steven Duff, as a frantic game neared its end before Britton kept his cool in added time to seal the first home win of the season.

The chance to build on the result comes with a home game against Metropolitan Police on Saturday followed by difficult away trips to Tiverton Town (October 16th) and Dorchester Town (October 19th).