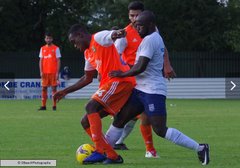 Luke Spokes came off the bench to feature in the late-late show as Yate salvaged a point with a stoppage time equaliser against an enterprising Hendon side, writes John Davis.

The visitors were quick to slow things down whenever the ball was not in play but they also showed themselves to be a potent attacking force and, on the balance of second half chances created, probably deserved to leave with all three points.

Yate's 'shaky start hoodoo' struck again with a goal conceded inside the first ten minutes. The ball was lost in midfield and when Luca Valentine was played into space his low drive ended up in the corner of the net.

Adam Forster did well to smother the ball at the feet of Kameron English soon afterwards and towards the end of the first half the elusive Valentine clipped the top of the crossbar with a shot from distance.

Yate's best opportunities of the first period both fell to Ollie Mehew. Set free by a Forster throw down the left he cut inside to shoot wide and later skewed his effort past the upright after a clever back-heel from Mike Bryant had put him in the clear.

Nick Peare levelled the scores early in the second half, his free kick from outside the box curling deftly round the defensive wall but needing the help of the post and Hendon goalkeeper Tyla Dickson before finding its way into the net.

It was no real surprise when Hendon regained the lead after 70 minutes. Connor Culcutt, who had just come on as a substitute, turned well just inside the area and slammed his shot into the top corner.

Yate huffed and puffed with a Peare header and a Sam Kamara shot but most of the attacking play came at the other end with Forster making a series of diving saves to keep out Howard Hall and the elusive English on three occasions.

With time running out, the home side mounted one last attack which resulted in Spokes' low drive somehow finding its way through a crowded penalty area and squirming under the hapless Dickson to make it 2-2.

Star man: Adam Forster (Kept the home side in with a chance with a series of brave saves in the second half.) Attendance: 247. Entertainment rating 3/5.