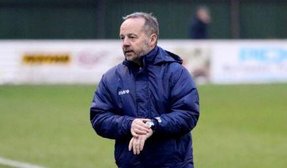 Polly has released the following statement regarding his resignation yesterday.

Regrettably as you now know, we have decided to resign as the management team of Yate Town Football Club.
It has been an honour and a privilege to manage this football club. Throughout our time here we have endeavoured to do our best for Yate Town FC. Hopefully we have given you something to enjoy during our tenure. There have been challenges and we have had plenty of ups and downs during the last four years.

Our task was to maintain Southern League status with limited resources which we all achieved. In our third season we managed to gain promotion into the Southern Premier Division which was an incredible experience, to then maintain that position was an fantastic achievement, I hope you all agree we now leave the club in a much better position on the pitch than when we arrived.

More often than not you leave a club because you have had a disagreement or you have not delivered on the pitch. I firmly believe we have over achieved in our time and we are rightly very proud of this success, John Lester, Martin Cutler and Nigel Hawkins and myself could not have worked harder to give Yate Town the platform it now has, we would have liked to have continued on this journey but feel now is the time to move on and allow someone else to take the club forward.

One of my last tasks as manager was to ensure that the football matters were left in good hands, this is the reason why i was influential in bringing Thommo back to Yate Town FC, I believe he is the right person to evolve the club on the pitch and hopefully influence off the pitch.

Finally I would like to thank you for your support during our time at the club, especially Judder, Cuts and Nigel for their loyalty and friendship, and to all the players that have helped us along the way.
Cheers Polly
#upthebluebells