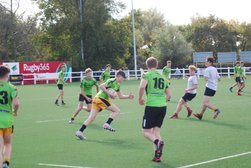 The last time Yatton played any kind of rugby match was way back in February against Wells. The world of sport has changed hugely since then and contact rugby is not currently allowed, but a number of Touch Rugby variations are. So, on a glorious Sunday afternoon, Yatton took on two Hornets teams at Ready4Rugby. This is a two-touch game which neither club had ever played competitively before, but the want and desire from the players to play any kind of game was so clear from the start, and meant that the afternoon was a tremendous success. The passion and the banter from players and coaches alike has been sorely absent since the start of the season, and it was just great fun to be a part of.

In the end Yatton played five sessions, each ten minutes long on a full-size pitch, which meant a huge amount of running and handling with the whole team integral to the results. On balance Hornets edged it in three or four of the games, but only ever by 2 or 3 scores and in truth that was never really the point. The aim was to provide an opportunity within the current playing protocols to play a game, test the skills, push the fitness and have some fun . . . and on all counts Yatton acquitted themselves superbly!

MATCH PHOTOS AVAILABLE VIA THE GALLERY LINK ABOVE