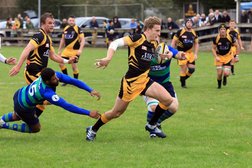 ‘Yatton sparkle seems to be returning’

What a difference a week makes; with a few drafted in and a couple of promoted players together with a brace of near 50year olds, to steady the ship, Yatton’s 1sts were back to enjoying it. Ok, St Bernadettes aren’t top of the league and Yatton had the home advantage, but even so….

On a dry pitch, cool day and little wind, Yatton started up the pitch with a purpose. After being repulsed on St B’s try line in the first 5 minutes a vital defensive error allowed St B’s to be first on the scoreboard after breaking down the wing having gathered an attacking kick for territory.

St B’s converted try was matched within minutes by Lloyd Richardson’s mercurial finishing on the wing from a series of driving mauls. Mike Gane slotted away his first conversion of the afternoon at 15 minutes.

Both sides continue to try and break the stalemate; James Copeland needing to put in a definite try saving tackle on Yatton’s 22. Minutes later, on the half-hour, Copeland was touching down his own try and shortly after, as the forwards dealt with St B’s weightier pack, Flanker Dan Williams weaved through a mesmerised defence to beneath the posts.

Within the opening minute of the half Gane’s nicely weighted crossfield kick gave Copeland the honour of collecting the Bonus Try and Gane dissected from near the touchline.

At 50 minutes Ben Bowyer sensibly followed up Williams break and it began to look as though Yatton were ‘out of sight’ with a score line of 33-7. But minutes later St B’s pack bulldozed up hill and the following open play gained them an unconverted try.

With Charlie Harrison facing up in the scrums and Gane’s varying game, the greater fluidity in the back division began to show dividends for less work.

Bowyer and Williams collected a try each in the final quarter but St B’s continued to ‘tussle’ until the end and questioned Yatton’s defence.