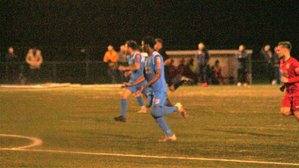 Yaxley had the first chance of the match of this full-blooded derby after 3 minutes, Spencer Tinkler heading a corner into the woodwork. Wisbech's best chance of the match came in the 29th minute when Yaxley keeper William Larkin initially punched a cross clear, scrambled to grab it inside the box but was robbed by Sam Bennett. The former Yaxley striker had the goal at his mercy, but was denied by an acrobatic block from Connor Peters (as well as the referee whistling for a foul). When play resumed, Yaxley took the lead as Florian Tsaguim charged down the right wing and set up an unmarked Matt Sparrow to hit a shot into the bottom corner.

It was 2-0 on the stroke of half-time when Peters kickstarted a Yaxley counterattack from a Wisbech corner. The centre back brought the ball forward before setting fellow Peterborough United loanee Hameed Ishola through for an easy finish below Wisbech keeper Luke Pearson.

Three minutes into the second half, the match was over as a contest when Dan Cotton tapped in a Tsaguim cross from the right to make it 3-0 to Yaxley. Not much happened in the second half after that, Yaxley seeming content with the scoreline and Wisbech seeming to lack any means of changing things.

Man of the Match: Florian Tsaguim (chipped in with two assists and was a constant thorn in Wisbech's side)