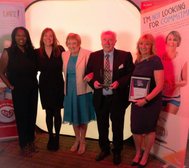 On Friday 10 May 2019 our fantastic netball club was awarded West Midlands Outstanding Netball Club 2019 at the Golden Globe Awards.

The Golden Globe Awards is an annual event that celebrates the success and hard work of all those involved in netball across the West Midlands.

We are extremely proud to be recognised and receive this award. Well done to everyone that is involved in our amazing club!