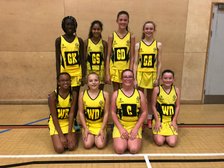 For this final group game it seems unfair not to mention all the players, as everyone deserves a mention for their efforts.

Mia Crutchley having proven her netball skills at the defending end of the court found good form with Halee Robinson at the other end to pop in 16 goals between them to cement a win over Birmingham City.

Myah Clacken and Moneeka Randhawa made their debuts for the side alongside Rudee Robinson; all managing good defending team work. Amy Vaughan and Sharn Mahal feeding the shooters well put in good efforts in the centre court attack supported excellently by Mia Cole.

Player of the Match: Mia Cole