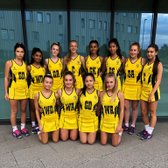 Tonight’s fixture for Neptune was against top of the table Birmingham Tigers 2 who were in the league.

The match began and after a shaky start where the opposition were able to make a turnover off the first Centre Pass the team started to get into their flow. Tia and Izzy M soon began to show a solid defence of the goal and this seemed to set the tone for the whole match. Izzy G, Izzy C and Evie J in the centre of the court were moving fast and working hard to get those key interceptions before passing the ball up the court. Phoebe and Kitty in the attacking circle were communicating well and using their space effectively. The 1st quarter finished 9-6 to Neptune.

The 2nd quarter started with Evie H now at WD. The girls continued where they left off in the 1st quarter, Tia, Izzy M and Evie H in defence were constantly pressuring the opposition attackers getting several interceptions and rebounds. Evie J was chasing after everything near her and Izzy C was busy in the middle of court. The opposition took their eye of the ball which they thought was going out allowing Phoebe to cleverly collect and put into Kitty who made no mistake with her shot. The girls were marking tight and minimising options for the Tigers which resulted in 2 held balls of the evening for the Tigers. Half time score 18-12.

The 3rd quarter began, and Izzy G was back at WD and Evie H was now at GA. The opposition had worked out that they were playing to Neptune’s game and tried to shut the girls flow of play down. However, they were unable to do this as Tia and Izzy M continued to apply the pressure and the Tigers could only add another 3 goals to their tally for the quarter. At the other end of the court Kitty and Evie H showed some lethal shooting skills as the lead continued to increase. End of the 3rd quarter 27-15.

The 4th quarter started and the girls just continued playing their game. All the team played their part, using their space effectively, communicating and encouraging one another throughout which resulted in a fantastic win. Final score 36 -20. Upom Izzy Cunnington.
This sees Neptune now move into 2nd place position in the table. Well done girls.