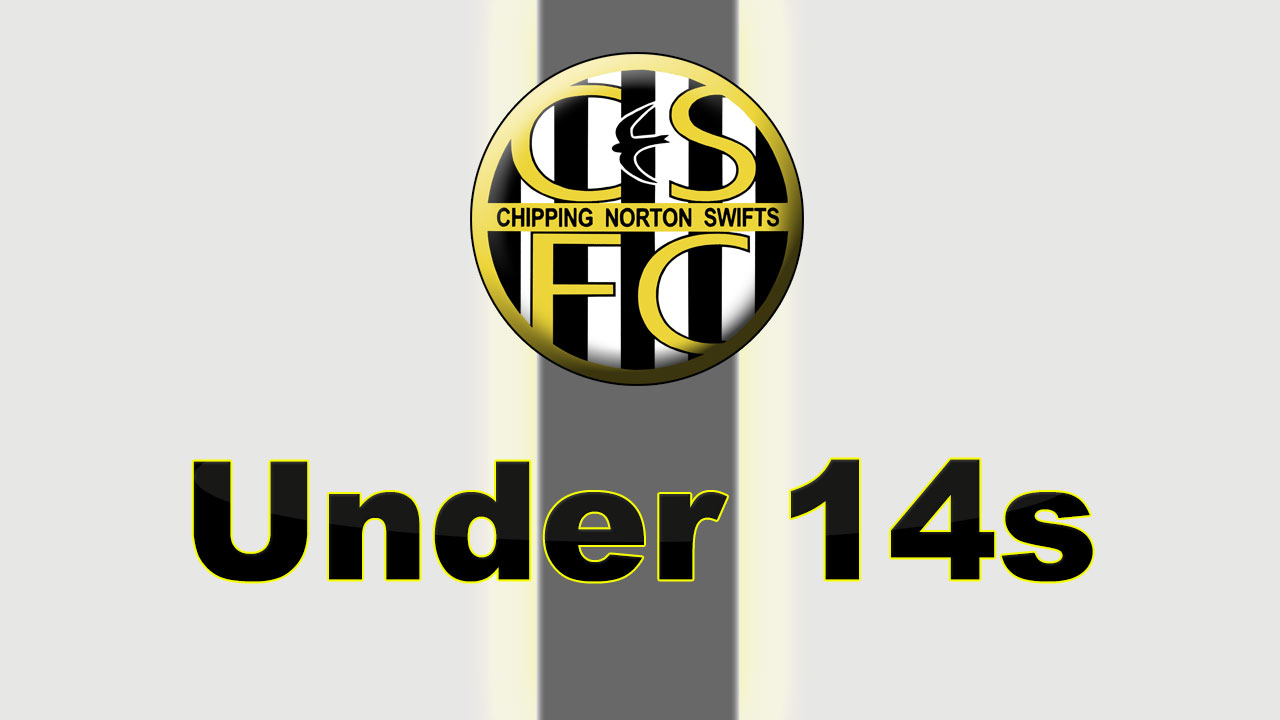 Swifts U14's made it two wins from three games in 2019, as they came back from two down to seal a convincing win away at Byfield Tigers.

Swifts were without Charlie Rose and Lewis Pretorius through injury, and also had Rex Chiles away - so were left with just 10 players for their fourth Champions Cup group game. They opted to remain in their 3-1-4-2 formation, taking out a forward to cover the fact they only had ten. Kian Cozier began in goal, with a three of Louis England, Owen Hancock and Freddie Jeffrey in front of him, as they set up the previous week against Bampton. In Midfield is where the change occurred, with Jerome Davies and Jacob Benham this time partnered by Ben Hughes, who dropped in to cover the vacant space. Alex Ford and Cole Davies continued as wing backs, with Ajay Itah up front.

The biggest factor throughout the game was the horrendous wind. Blowing from one goal to another for the entire 70 minutes, it turned the game into a scrappy affair on many occasions, with neither team able to clear their lines when playing against it, or able to keep their passing in range when with the wind.

For the first half, it was the hosts who were playing with the wind "advantage" - their plan was obvious from the first minute. The long ball over the top of the Swifts defence was tried time and time again, even from the goalkeeper, with the wind so strong it was easily carrying the length of the pitch. Swifts dealt with it well in truth, after an early scare, they adapted quickly, with Owen Hancock looking to drop deeper than the rest of the side whenever a long ball opportunity came, in a bid to sweep up any danger. For the first 10 minutes, Swifts were the better side, they knocked the ball around far better than their opponents, and looked much more of a threat.

Typically, rather than the wind be a factor in the opening goal, it was a mistake, and to make matters even worse - the goal went against Swifts. Chippy rushed a fairly routine throw-in on the halfway line, with the ball striking Jerome Davies in the back, with him completely unaware his teammates had restarted the play, and not given him a shout. Instead, the ball dropped to a Byfield midfielder completely clear, to send a through ball into their forward, Charlie Andrews, who finished well on the right foot.

Fairly soon after the goal, the wind finally caught Swifts out, and Byfield doubled their lead. A long ball seemed for all the world to be running aimlessly out of play, but was somehow kept alive by Charlie Andrews, who raced clear and finished strongly once again.

Swifts were somewhat shell-shocked, seemingly in disbelief at the fact they were two goals down in a game they looked to be controlling, but after 10 minutes of trying to regain that control, they began to look forward again, and find a way back into the game. They did just that, and some, with two goals in a matter of minutes. Both goals were almost identical - the first, Cole Davies' cross was only cleared as far as Ben Hughes, who took one touch before lifting a lovely effort over the goalkeeper and into the far corner. The second, just a minute later, came when another poor clearance fell to Hughes again - he lifted another one over the 'keeper's head, and suddenly Swifts were level again.

With just 5 to go until the break, Swifts were doing all the pressing - a Louis England corner was met by a bullet header from Cole Davies that sailed just over, before a free kick taken by Freddie Jeffrey resulted in a goalmouth scramble, which somehow found its way clear. With the first half going into added time, Ajay Itah won another free kick for his side, a little more central than the previous one. Itah took it himself, lifted it over the wall, where it was fumbled into his own net by the goalkeeper. After a very, very delayed response from the linesman, the goal was given , completing the first half comeback.

Swifts were full of confidence now, knowing that they had turned the game in their favour, and were now a goal to the good, with 35 minutes of wind-assisted football still to play. Suddenly, it was clear how well Swifts had dealt with the conditions in the first half - Byfield couldn't clear their lines, and looked increasingly nervy dealing with the long ball - Swifts did everything but score in the opening 12 minutes of the second period; Cole Davies smashed an effort off the bar, Ajay Itah had an effort well saved, and Louis England, Jacob Benham and Jerome Davies all had shots from distance held by the goalkeeper.

But eventually they found a way through. Louis England's throw-in into the box was poorly dealt with once again, with Cole Davies recovering the ball, he looked to beat the last man but was blocked off - instead, he shifted the ball onto his right for a shot which was blocked, and eventually fell to Ben Hughes, who drilled the rebound into the far corner for Swifts fourth, and his Hat-trick, doubling his tally for the season from 3 goals to 6 from midfield.

Four was quickly made five with a significant goal for Swifts - a Cole Davies cross was blocked, with Ben Hughes again providing a shorter option just behind him. Hughes skipped past the right back and made his run right along the goal line, lifting the ball into Jerome Davies, who somehow could only guide his header off the crossbar from inside the 6-yard box. As the 'keeper looked to pounce on the ball, Jacob Benham got in front and tapped the ball in, for his first Swifts goal - much deserved for one of the side's "unsung heroes", since joining up with the side back in April.

Swifts were utterly dominant at this point, and were throwing men forward at will. Byfield took advantage of this, and managed to pull a goal back for themselves with a good strike from the edge of the box - but this was probably the best thing to happen for Swifts, as this refocused the side, allowed them to regroup, and they continued to dominate from then on. Almost from the restart, some great work from Alex Ford to win the ball back and drive forward set up Ajay Itah, who struck the foot of the post.

Chippy managed two more goals before the finish - interestingly, the only two goals where an Assist was registered - the first, a reshuffle saw Freddie Jeffrey and Louis England take corners from the opposite sides, in an aim to take advantage of the wind and swing the ball towards goal. It gained instant rewards, as Louis England's first corner from the left side was met on the half volley by Cole Davies - his 4th goal of the season.

The scoring was finished in the final minute of the game, with the goal of the game. A loose ball in the Byfield midfield was pounced upon by Owen Hancock, who picked up the ball, and faked a pass to run past the next man. Instead of moving the ball on from there, Hancock decided to go on a run. After already beating two players, he proceeded to nutmeg the third, skip past a fourth and cross from the byline to Jerome Davies, who could tap in for 7-3 and finish off a wonderful individual run, from absolutely nowhere.

A good performance from Swifts, who now have a record of 2-0-2 in the Champions Cup, putting them third in the group. The only two teams above them currently are the teams that beat them, so Swifts will be confident of picking up a few more points before the group is up. Their next game sees them face another firm test, and finally a home tie - against Bure Park Juniors (February 3rd).