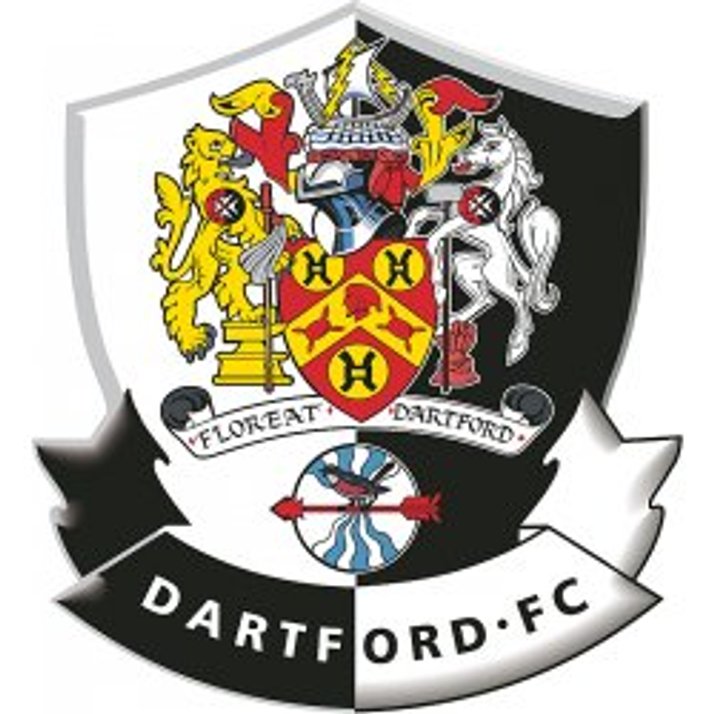 note: Darren McQueen scores on his debut for Darts, following his one month loan from Sutton United

An entertaining game ended all square at Arbour Park, with Slough taking a very early lead and then having to come from behind to secure a point.
The Rebels came into the match in terrible form having won just one league game in 2019, whilst visitors Dartford are one of the form teams looking to continue their push for the play-offs.
Neil Baker and Jon Underwood have been unhappy with some recent performances, with their side dominating games but failing to find the back of the net to make their pressure count. With this in mind they brought in Billy Clifford on loan until the end of the season from Billericay Town. Clifford grew up in Slough and came straight into the starting eleven.
And with just a minute played, Slough took the lead through Ben Harris. A ball forward was beautifully plucked out of the air by Manny Williams who then back-heeled it into the path of Harris to take a touch before firing a low left-footed effort across Bailey Vose and into the goal.
Slough looked to double the lead a few minutes later. Sean Fraser crossed, but it was just too high for Ben Harris who missed his header with the ball then hitting an unexpecting Lench on the thigh. Dartford counter-attacked dangerously with new signing Darren McQueen unable to get a touch on a dangerous cross.
The Rebels then had a succession of corners with the last being cleared to the edge of the box where Matt Lench was waiting to volley, but his effort went over the bar.
Dartford found an equaliser on 13 minutes. McQueen proved too hot to handle, his quick feet creating himself some space before crossing into the six yard box for Ben Greenhalgh to volley in.
Billy Clifford later had a good chance for a debut goal. Warren Harris delivered a great cross and Clifford found space, but his header didn’t trouble Vose and went over the bar.
Dartford goalkeeper Vose had his heart in his mouth for a second as his clearance was very nearly shut down by Warren Harris. A few minutes later Vose was under pressure again as Manny Williams and George Wells combined well down the left to create some space for Wells to hit a stinger.
Slough came close once again as Warren Harris got on the end of a powerful cross in by Lench, but he could only hit the crossbar with his effort.
On 35 minutes Slough nearly regained the lead with a quick corner. A long ball in was headed back across the box by Sam Togwell finding Manny Williams who ran in to volley, and whilst the ball beat Vose, Robbie Vint cleared off the line.
The final talking point of the first half unfortunately saw Ben Harris forced off injured after an accidental collision with Matt Lench. Harris was replaced by Chris Flood, who in turn would have to make way at half time after suffering a quadriceps injury.
Tommy Wood replaced Flood at the break, and Dartford flew out of the traps at the start of the second half with McQueen using his pace to terrorise the Slough defence before a cross was headed over by Phil Roberts.
On 56 minutes the visitors took a controversial lead. Referee Tom Bishop awarded a free kick to the visitors, with the home side complaining that Clifford had been fouled. Dartford took full advantage with the set piece, finding Roberts in a huge amount of space to cross in for McQueen to tap in unmarked.
But far from letting their heads drop, Slough levelled the scores just minutes later through an unlikely source.
Warren Harris played the ball into the box for Sean Fraser, and full-back took a good touch before firing the ball in between the legs of Vose for just his fifth goal in 302 matches.
Clifford was now starting to look at home in an amber shirt at Arbour Park and began weaving his way through Dartford defence, getting into the box to shoot. His shot was blocked, and so too was Warren Harris’ rebound attempt.
The game became very tense with both teams still creating chances and there was a distinct feeling that the next goal would win it. Both sides picked up bookings as they broke up their opponent’s counter-attacks, with Wells and Tom Bonner cautioned for Slough and Dartford respectively.
On 80 minutes it looked like that winning goal would come as Dartford piled into the box. With multiple shots being blocked it then looked like McQueen had scored, but Lench and Sam Togwell both threw themselves at full stretch to block the ball on the line before Jack Turner made an acrobatic save to end the spell of pressure.
There followed a final few substitutions before the final whistle with both sides knowing they came close to winning but just as close to losing an excellent match which will have no doubt excited any neutrals in attendance.