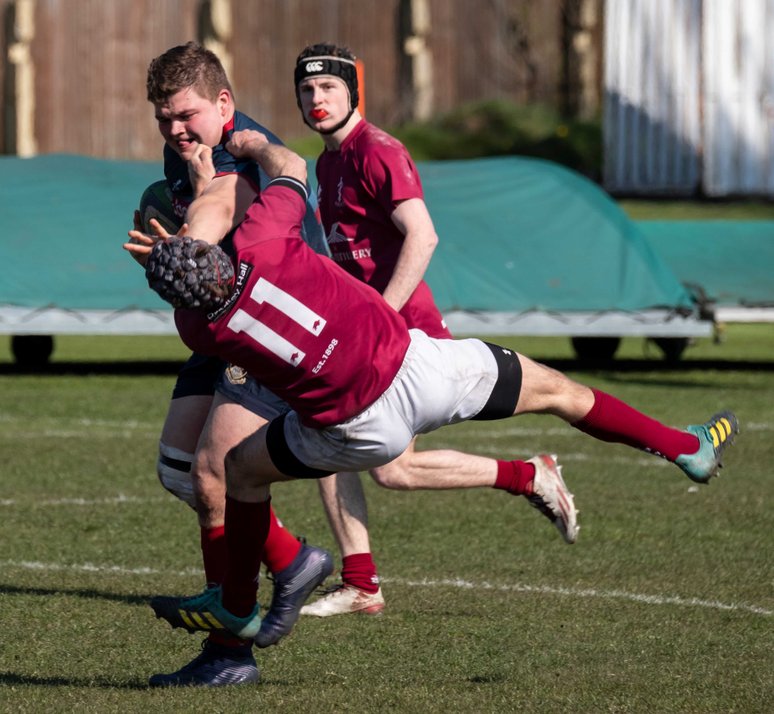 Westoe too Strong for Medicals

South Shields Westoe ended the season with a comfortable win against Medicals on Saturday. Running in thirteen tries and missing many more opportunities, the home side were too strong for the visitors and finish the season in fifth position on equal points with Stockton.

The league has proved to be much stronger this year and consistency has been the key, with Durham, West Hartlepool and Northern ahead of the rest throughout the year. Westoe always managed to compete with the top sides; however a pre-Christmas drop in form saw them lose four matches in a row and cost them any chances in the tight competition.

All eyes are now turned to their potential return to Twickenham with their National Intermediate Cup play-off against Kenilworth on the 20th April.

The Medicals game started slowly, lacking the urgency and pace of last week’s match-up against Northern. With some early two-on-ones and ‘easy’ scores squandered, the first try came after 8 minutes. A clever Ross Macauley kick gave the visitors a defensive line and following an Anthony Rumis steal, Ryan Lamb crashed over close to the posts. Converted 7-0

Medicals came close after a weaving run from their outside centre, but Westoe’s defence was firm and the visitors had to make do with a long range penalty, after Macauley received an early yellow card for not releasing. 7-3

Westoe’s scrum was on form and drove Meds back at every put-in, with the next two scores coming from stolen balls, driving Meds off their own put-in and Andy Kirton picking at the base. The first saw an offload to Sam Seymour and on to Paul Evans (12-3), then Macauley, back on the field after his sin-bin collecting the second to touch down. Converted 19-3

Westoe secured the bonus point after 35 minutes with some deft handling, keeping the ball alive, with Jamie Preston scoring in the corner and the ref deciding to blow five minutes early. 24-3 HT

Any hopes of a comeback were blown away in a five minute scoring frenzy by Westoe. Sean Ramsay chased the kick-off, stealing the ball and spinning wide, where James Long split the defence to score on his debut start for the side. 29-3

Taking the restart, Preston linked well with Macauley, who kicked infield for Evans to chase down for his second after less than three minutes of the half. Converted 36-3

Try number three came with only five minutes played. Again the scrum caused damage and loose ball spilled by a retreating pack was scooped up by Sam Seymour leading to a Matt Rannigan score. Converted 43-3

Evans crossed for his hat-trick after ten minutes of the half after a spell of close interplay (48-3) and Macauley took Westoe’s ninth try with a blistering solo kick-off return. Converted 55-3

James Long took his second try of the day after breaks from the two Sams, Hughes and Seymour, and a little festival style passing amongst the backs. 60-3

An ambitious John Younghusband overhead pass, failed to reach Evans out wide, but Seymour was on hand to ground the loose ball and try number eleven. Converted 67-3

Another scrum steal gave Alex Wylie the platform to pick and drive over the line with eleven minutes left to play. Converted 74-3

The last play of the match came on 31 minutes after a Ryan Lamb reverse pass to Evans was spun wide, Anthony Rumis taking the ball and powering over into the corner, where the ref decided he’d seen enough, blowing time early following the conversion. 81-3 FT

A difficult day for the visitors who found Westoe on a high, and with players rested before next week’s National Cup, met players looking to force their way into the team and the chance of a day at Twickenham to follow.

The away fixture to Kenilworth will be held at the Jack Davies Ground, on Glasshouse Lane, CV8 2AJ

Other Durham/ Northumberland Division one results