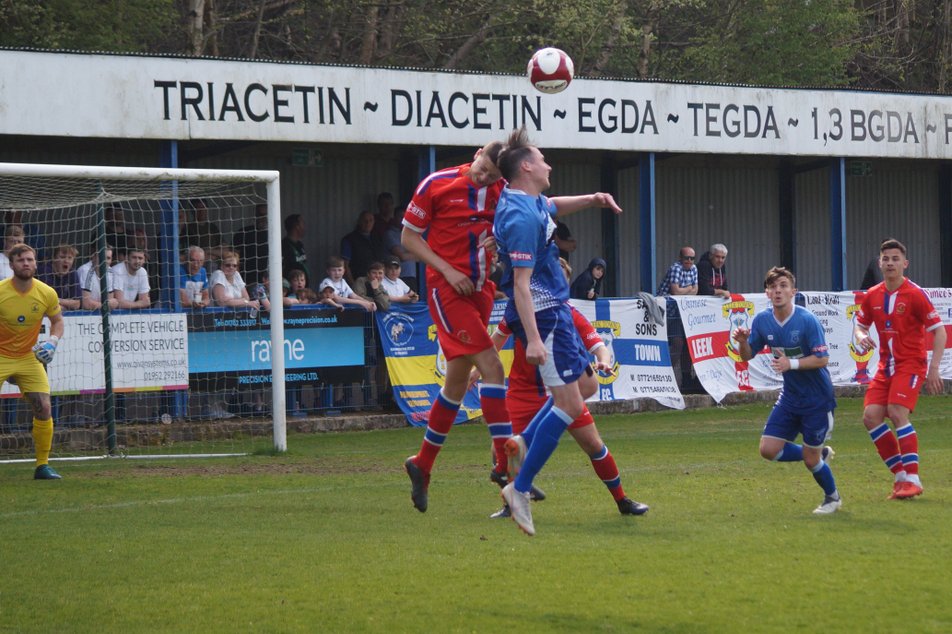 The chase for a play-off spot will go down to the final day as Blues will held to a 1-1 draw by Chasetown at Harrison Park.

he game was a tense affair played unusually for a Bank Holiday afternoon in warm sunshine on a bone dry and bobbly pitch which did not promote flowing football.

Neil Baker made changes from the side that won 1-0 at Clitheroe with Jordan Johnson, Niall Maguire and Lewis Short replacing Niall Maguire, Charlie Walford and Rio Adebisi.

Leek almost got off to the perfect start when Jack Sanders header from a corner rattled the crossbar with just three minutes on the clock.

Blues did take the lead on 17 minutes when Rob Stevenson on the right fed Jordan Johnson and he slipped the ball past the onrushing keeper.

Despite their side being in front the Leek faithful, the majority of a season’s best 518. seemed nervy and subdued, until they were stirred by a bizarre refereeing decision.

Stevenson darted in from the left and made strides just outside the box until he appeared to be crudely up-ended only for the official to award Chasetown a free-kick - much to the anger of the Blues fans.

Right on half-time Dan Trickett-Smith cut in from the left and beat two men with a jinking run but Curtis Pond in the visitors goal made the save from a low shot.

Immediately after the break Sanders missed a golden chance to make it 2-0 when he got on the end of Stevenson’s cross only to head wide from four yards out.

Three minutes later Trickett-Smith crossed deep, Stevenson headed back across the six yard box but no one was on hand to apply the finishing touch.

On 64 minutes Stevenson was denied when his fierce shot was blocked by Pond who came out to narrow the angle.

Eight minutes later The Scholars were level when substitute George Cater picked up the ball on the edge of the box and fired low through a crowd of players into the bottom far corner.

Baker brought on Bott, but Leek toiled through the last quarter of an hour never really looking like they would score and Chasetown content to claim a point with their only real effort on goal.

Other results kept Town in 3rd place so they travel to Colwyn Bay knowing that a win will seal 3rd place and a home tie in the semi-finals, whilst a point would at least guarantee a play-off place.