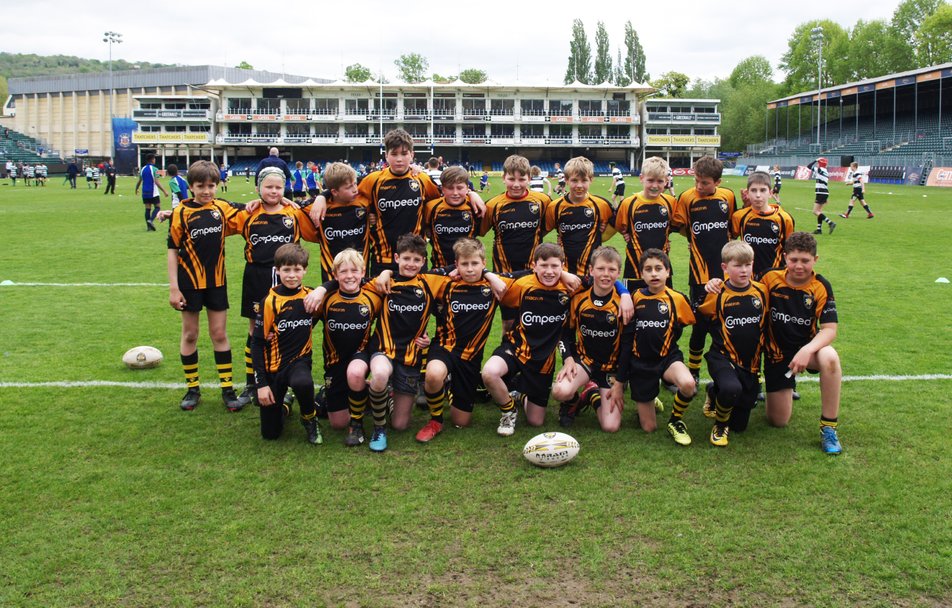 Season (and mini rugby) finale for the boys at Bath Rugby

What a great way to round of the season, travelling up to Bath to play out the plate finals at the Rec. Five games on midi pitches (7 minutes each way) were played against teams drawn on the plate side of the competition. Three of these games were played in the stadium which gave the boys a wonderful sense of occasion and parents a tingle of pride as they perhaps dreamed of what lies ahead for these talented youngsters’ sporting careers!

GAME 1 – (Minety, now officially our ‘18/’19 season nemesis) was lost 2-1.
Minety were the strongest team we faced on the day and the one game we needed to be most focussed on. Matthew scored the opener in the first half with a run eluding all of the Minety defence. MRFC spread the ball wide and looked the more dangerous. However, MRFC seemed intent on giving their opponents the ball through needless infringements and the score levelled at half time. Guy came close to scoring but was thwarted in the corner by a good defensive tackle. Harry saved a certain try with a text book full back tackle. Sadly the winner came after a great run for glory by OJ was turned over by their tall, speedy winger who ran the length of the pitch and touched down.
Final verdict – we were too lateral and didn’t work or communicate hard enough off the ball.

GAME 2 -
Dorchester was lost 1-0
This game was another frustrating affair. It was one where the result slipped through our grasp. Our rucking seemed to break down which did not help. Both defences neutralised each other’s attack but Dorchester sneaked it with a single score.
Final verdict – we let them score more than us!

GAME 3 (Trowbridge) was won 5-0
After two disappointing scores Marlborough needed to salvage a result to get our heads back up. Having beaten Trowbridge recently at the Minety festival we knew this was a great opportunity. The boys worked harder for this. James L made a text book (number 7) turnover at the ruck from which Harry scored a nice try using his speed and agility to full effect. James L scored the second sensing space and finding the line with a beautiful step inside. In the second half, Ollie and Freddie combined with ‘bullocking’ runs only for Freddie’s try to be denied by an earlier knock on. Matthew also crossed the line but failed to ground the ball. However, Marlborough put the nail in the Trowbridge coffin with three rapid tries late on. (1) Freddie doing a Chris Ashton impression in front of his parents, (2) Jacko receiving a blindside call from James L and (3) Charlie C opening his tally with a fine effort in the midfield.
Final verdict – a game we believed we could win and we did win

GAME 4 (Melksham) was lost 2-1
The boys were bitterly disappointed by this result. With some confidence rebuilt during the previous fixture MRFC started well, recycling ball quickly and playing with width and endeavour. Harry scored putting us deservedly in the lead at half time. The second half began well but when Melksham levelled the score they smelt blood. Their game lifted and they piled pressure on Marlborough. Decisions were not going our way and this got into our players’ heads. Melksham scored at the death to the delight of our opponents. This mattered more to them and sadly put an end to any hopes of silverware.
Final verdict – When things are not going our way we need to channel that frustration into a positive force.

GAME 5 – (Warminster) was won 5-0
Marlborough’s final, delayed, game in the stadium was one for the boys to go out and enjoy. And that they did. A fine example of sportsmanship was Charlie C’s 40 metre solo run, breaking open Warminster’s defence, only to selflessly pass to Jacko in close support. To say that the parents’ hearts were in their mouths is an understatement, but the pass was clean, the take was secure and the touchdown was firm. Charlie scored the second try which was switched behind the scrum by James L. Archie B also scored a solo effort on the blindside to the delight of his parents (but perhaps not his brothers?) Freddie got his name on the scoresheet again with a route 1 effort. With a bit more time and solid possession from the forwards, the backs could experiment with some of their moves. One ended comically in a collision by the two dummy runners. However, we held on to the ball. Archie B got his body under the ball to deny what looked like a certain try by Warminster. The final score, and one that every parent appreciated, came from Guy. Harry set up the try driving at the defence and fed the winger with an overlap to exploit. Hopefully that one pass to the wing, for a certain try, made up for those hundreds of missed opportunities this season in matches and training?

Again, well done to the boys for sticking out this long season and putting in so much commitment, energy and emotion. Every single player has progressed positively thanks to their commitment, parenting and the great coaching that has gone on this season. We pray for some growth spurts this summer so get those BBQ’s fired up! But also, importantly, keep up the fitness and honing the ball handling so we turn those narrow defeats into glorious victories next season.

Have a great summer!

Reckon you could take on the men’s England Rugby team?