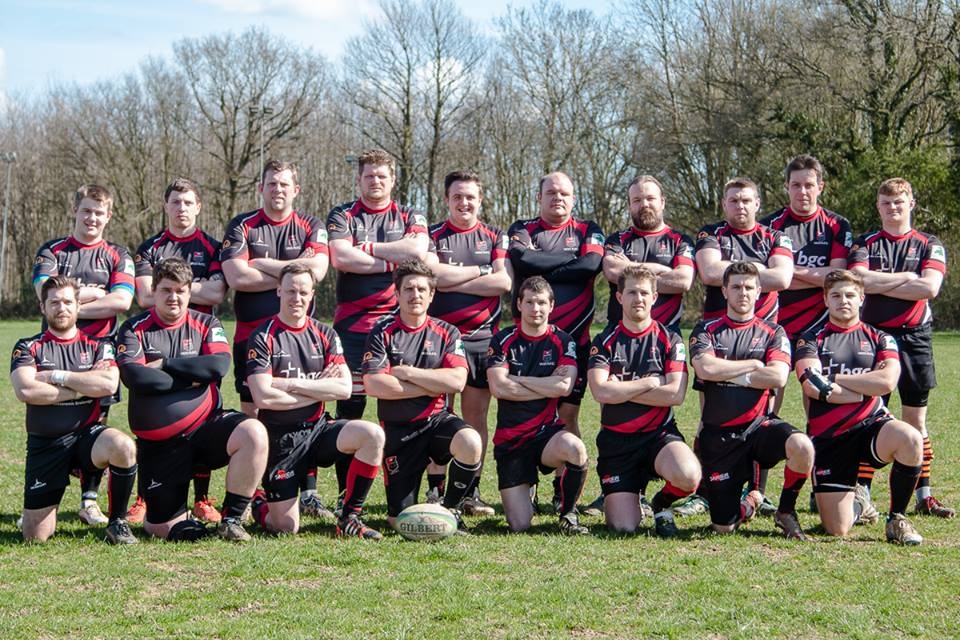 VIGO 2’s FINISH ON A HIGH

Vigo finished their season with a creditable win over East Kent outfit, Thanet Wanderers, and if Vigo’s kickers had been able to kick the skin off a rice pudding, they would not have had to endure a nerve wracking final few minutes, Thanet themselves missing a conversion, albeit extremely difficult, to win the match. According to Inspector Cox of the Yard, it was like kicking a sack of mince. Strangely, a ‘sack of mince’ is West of Scotland slang for a woman who lies still during the act of sex. So, mind well and truly boggled, I’d better get back to describing what was, in fact, a good game of rugby. Considering the conditions, and supine Scottish ladies.
Vigo, with the help of the slope, started at some pace. Lewis Evans, who has enjoyed a great half a season, was soon crossing the line. In the process, however, his shoulder became a tad disconnected from the rest of his body. Although, Darren Cox used all his Police training to reintroduce the shoulder to where it ought to have been, it was, sadly, the end of the game for the peripatetic flanker. Some (unkindly) opined that the real reason was Jug Avoidance, but that was a bit cruel, especially after the medical reports from Inspector Cox, or rather Doctor Cox, had been offered in defence. Taking Lewis’s place came Theo Gander, who went on to have a fine match.
Before Thanet could take stock, the long journey obviously still in the limbs – not exactly jet lag but a debilitating 60 mile road journey - Vigo struck again. Harry Pattison junked through on a typical Pattison run,all side steps and ignoring support, but nevertheless highly effective to score a fine solo effort. And young Harry was not finished there. A beautifully crafted chip behind Thanet’s onrushing defence just begged to be put down, which Adam Fitzgerald duly obliged , winning the race to the ball.
So, 15-0 up in a short space of time, Vigo seemingly in control. But, of course, this is Vigo. Nothing if not generous, they then gifted a try to the opposition,dropping the ball, which was scooped up by Jamie Goulder, who promptly touched down, and adding the conversion. Suddenly the score had been halved. Well not quite halved . that would have been 15-7 ½, but close enough.
The second half saw Thanet have use of the slope, and Jet lag easing, they attacked Vigo with some gusto. I thought that was a banned substance, myself, but hey ho. The team, hitherto at sixes and sevens and seemingly all at sea, and whatever cliché takes your fancy, came right back into the game. Chris Hood, a strong ball carrying number 8, was beginning to make some serious dents in the Vigo defence, in which once more, skipper Ben Buckland shone with some splintering tackles. Gulliver, a giant in the centre (sorry, couldn’t resist it) was also making some inroads as Thanet came strongly at Vigo. A series of pick and goes denuded the Vigo defence, and Joe Harmes was able to benefit, his try converted by Goulder.
The visitors pack was beginning to dominate, but a combination of excellent defence and the weather – cold, icy rain – affecting the handling, allowed Vigo to withstand the pressure. Dan Billington, a mercurial winger, in his first game of the season , was a bright spark in the Vigo effort, whether covering diligently or instigating sharp raids from deep (and coincidentally wrecking the sweepstake on length of involvement). With time running out, an excellent handling movement, belying the conditions, saw the ball reach Adam Fitzgerald who ran strongly for an excellent try.
This should have put the game to bed but with about ten minutes left a sweeping attack by Thanet drew Vigo’s defence in, releasing Tom Kemp who scored wide out. The kick would have been difficult in perfect conditions, but at the end of a tiring match, in cold and wind, it was nigh impossible. Fortunately for the Villagers, Goulders attempt didn’t make it. The margin was one point in Vigo’s favour. Surely they couldn’t mess this one up. Thanet threw everything at their hosts,who tackled everything. The referee, who by the way, had an excellent match signalled ‘’Last Play’’, Harry Pattison shaped to kick the ball into Harvel but to his horror, a Thanet player, who apparently had been auditioning for the role as a hobbit in Lord of the Rings, sprang from nowhere to knock the ball down. Vigo’s collective heart stopped as the ball rolled over the line, in slowmo. Fortunately, the ball also rolled over the dead ball line, and Vigo had escaped. Just.