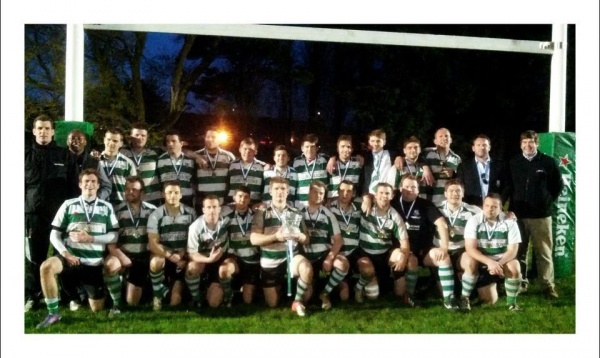 The champions are made to work hard for their bonus point win.

With the pressure off some of the fluency of recent weeks was missing and Chew Valley had to work for their try honus point win.

OB's came intent to try to spoil the promotion party. Their forwards made the hard yards and Chew Valley's errors and soft penalties led to an early penalty for outside half Jack Price. Tom Bryan crossed on 8 minutes when the hosts looked after the ball and scrum half, Alex Cameron converted. Another soft penalty was converted by Price straight from the restart and a try from centre, George Hazell, converted by Price rattled the champions up to the 20 minute mark when prop, Sol Thompson, was driven over after a series of pick and go close to the visitor's line. Cameron converted.

Old Bristolians were back in front on the half hour with another Price penalty. In a physical encounter Chew Valley lost the ballast that is Jonny Eves from the front row with a head knock on 33 minutes. On 35, Bryan shaping to kick to the corner took the tap and the visitors paid for turning their backs as he crossed for a try virtually unnapposed. Cameron converted just before the break.

For the first 15 minutes of the second half the visitors were penned in their own 22 but did not conceed and defense was dominant for much of the half. Dan Gatton at 10 scored with a trademark show and go to ghost through a gap to go in under the posts for the bonus point try on the hour.

Chew Valley's attempts to turn on the style were thwarted by stout defence and their own errors. Tom Bryan was guilty of hattrick avoidance as he fumbled the ball forward with the line begging on 65 minutes.

The visitors kept up the pressure until the end and yellow cards on 75 and 78 minutes for Gatton and Bryan meant that when Price chipped over the defence at the death George Hazell won the scramble for the ball and a try converted by Price for the losing bonus point.