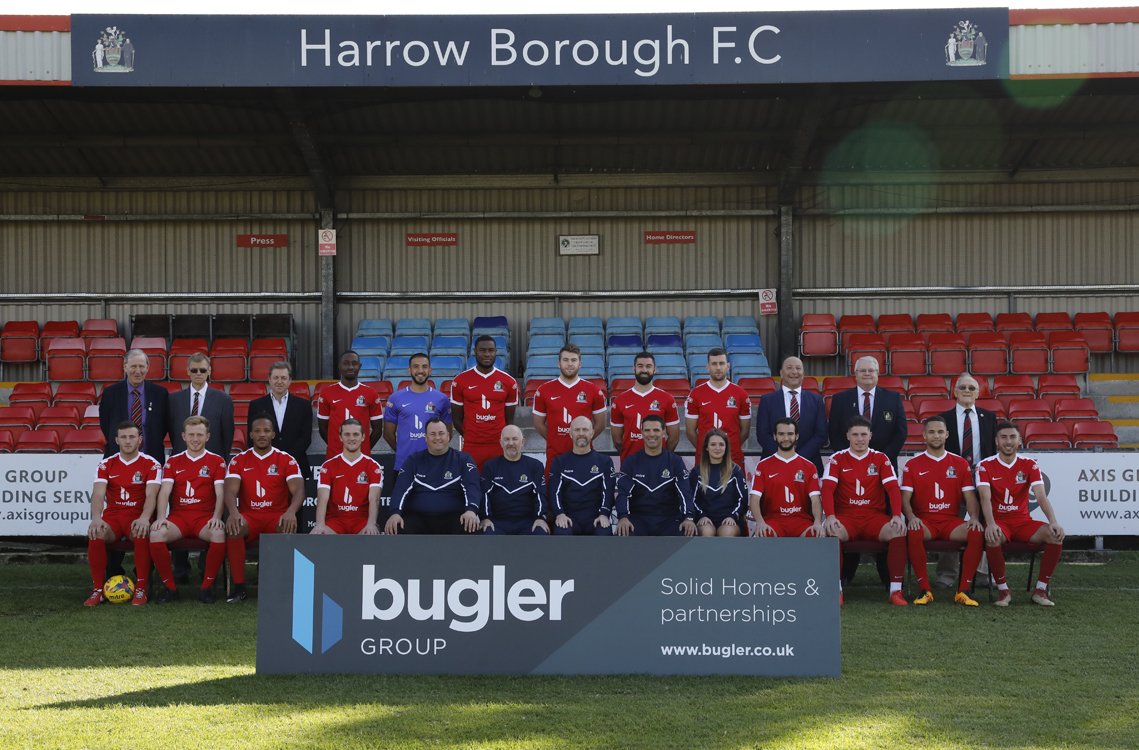 Harrow at last found their shooting boots, scoring more than one for the first time in two months as the league’s whipping-boys were dispatched on a glorious warm sunny afternoon.

Mind you, it was the midfielders doing the successful shooting, George Moore and Frank Keita both getting hat-tricks, with the only goal from Borough’s misfiring strikers coming from the penalty spot.

With Michael Bryan and Jordan Ireland injured, and Mark McLeod and Anthony O’Connor rested to the bench, Adam Pepera, Ryan Moss, Lewis Cole and Moore returned to the starting line-up. Poor Staines have been getting thrashed on a regular basis in recent weeks, and the omens were there as early as the fourth minute as Harrow opened the scoring as they attacked the school end. Excellence Muhemba won a free-kick out on the left, and Moore’s low delivery went across the goal area without a touch from anyone, nestling in the far corner of the net.

But Staines almost equalised immediately. Shaun Preddie’s error led to a left-wing attack, and Piorkowski met the resulting cross with a far post shot that cleared the bar when he should have hit the target. Muhemba laid the ball back for Cole to shoot just wide, before a poor Ryan Haugh clearing header landed at Piorkowski’s feet, his drive again going over. After 15 minutes Harrow doubled their lead as Moore ran onto a pass and slipped the ball past Dixon.

Dixon made a good stop from a fierce Moore shot, Cole firing wide when another Moore shot was blocked. Dixon saved Moss’s flick of a bouncing ball, and Moss nodded the ball on for Muhemba to run clear but blaze the ball well over. After 24 minutes, Cole picked up Moore’s left-wing throw, and played the ball cleverly to Keita, who volleyed an angled effort over Dixon.

By now it was one-way traffic but Harrow did not add to their lead in the remainder of the half. Keita’s 20-yarder was saved, Moore volleyed over at the far post from Cole’s cross, Moss’s angled effort beat Dixon but beat the far post too, before the Harrow skipper, who cannot buy a goal at present, had a shot deflect over from the edge of the box.

Four minutes after the interval, it was 4-0. Moss burst through on goal, foiled by Dixon, but the ball rebounded to Keita who hit a sweet drive-volley from the edge of the box over Dixon and under the bar.

A rare Staines attack saw a close thing as Al-Droubi’s clearance rebounded off Barreto but went wide. Moss then hounded Dixon into giving the ball away out on the left, but shot well wide of the far post. In the 63rd minute, Nathaniel Oseni’s free-kick found Moore with his back to goal on the right side of the Staines box. He nodded the ball up and, still facing away from goal, back-headed it over Dixon into the far corner to complete his hat-trick.

Substitute Max Holland found the busy Cole, who pulled the ball back to the edge of the box for Keita to strike over the bar. Dixon then came out to stop another substitute, O’Connor, as he bore down on goal. O’Connor took the ball past Kokurinkov but mishit his shot, and then went through and tried to round Dixon, only to be foiled by the keeper.

Oseni shot over from Moore’s pass, before the game moved into the closing minutes. There were still plenty of goals to come! In the 82nd minute, Harrow took a quick corner. Cole and Oseni found Moore whose deep cross was headed past his own keeper by Kokurinkov for an own goal, under heavy pressure from Holland.

Hopes that Harrow might get a clean sheet were dashed when an 83rd minute far post cross was volleyed through Al-Droubi’s legs by Barreto. In the 86th minute, it was 7-1, as O’Connor sent Holland up the left. He played the ball back to Moore, whose shot came back off the upright. Cole, following up, slammed it in from the edge of the box. One minute later, Moore broke on the right and crossed for the supporting Keita to seal his own hat-trick from a few yards out. Harrow’s ninth came in stoppage-time, when O’Connor and Moore played a one-two inside the box, with O’Connor felled as he shaped to shoot. O’Connor sent the keeper the wrong way to complete the scoring.

So, a mixed season of home form ended on a very happy note, and Harrow moved up to 8th place in the table, with one game to go: they conclude the campaign when they travel to Salisbury, a side safely in the play-offs but looking to protect home advantage in them, this Saturday.