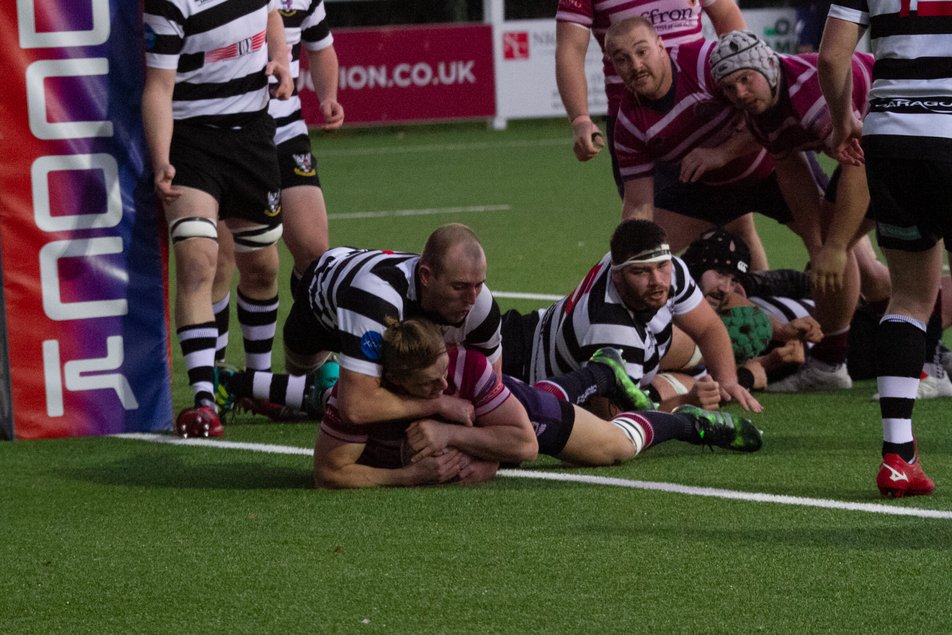 A perfect sunny day for rugby and Shelford were certainly looking sharper during the warm-up conducted by Dan Richmond. For the first 10 minutes Shelford looked the stronger side, camped in the Bedford half and the backs launched a wave of attacks on the Bedford line, meeting stiff resistance.
On 15 minutes, from a Shelford spilled ball, Bedford launched their first real attack, chipped over the unprepared Shelford defence and scored. The kick was missed so the visitors went into a 0 - 5 lead.
Bedford took control from the restart, kicking deep into the Shelford 22. Shelford lost their own line-out, the ball was spun wide, tackles were missed and Bedford were presented with an easy try which they converted to extend their lead to 0 - 12.
Shelford finally got points on the board after 22 minutes from the boot of Lewis Cracknell after a Bedford infringement, reducing the difference to 3 - 12. However, Bedford countered immediately with a superb cross-field kick from their number 10, collected by the wing for another converted try and further extending their lead to 3 - 19.
The last 10 minutes of the half were all Shelford with a number of attacks right on the Bedford line that all failed due to handling errors and infringements.
Bedford started the second half strongly and scored from their first attack, taking the score to 3 - 24. This, together with the half-time team talk, appeared to spur Shelford into action. A good touch find from a Lewis Cracknell penalty set up a Shelford drive to within three metres of the Bedford line but a knock-on ended the move. Finally, on 50 minutes, Shelford broke through with an excellent try from Harry Rogerson, converted by Lewis Cracknell. Bedford responded immediately and from a half-hearted attack, the ball was chipped over the Shelford defence and touched down in the corner, taking Bedford's lead to 10 - 29.
Finally, Shelford started to get into the game and dominated the rest of the 2nd half. From a tap penalty in their own half, Shelford broke through the Bedford defence and a try was scored by Frederick Betteridge, reducing the deficit to 15 – 29.
Wave after wave of Shelford attacks followed with constant pressure on the Bedford line until, from a line-out, Jack Harvey made himself some space to get through the Bedford defence and score. Lewis Cracknell converted to bring the score to 22 - 29.
Shelford needed more time, but there wasn’t any. But it must be said that the team showed real spirit and some definite signs of improvement and organisation.