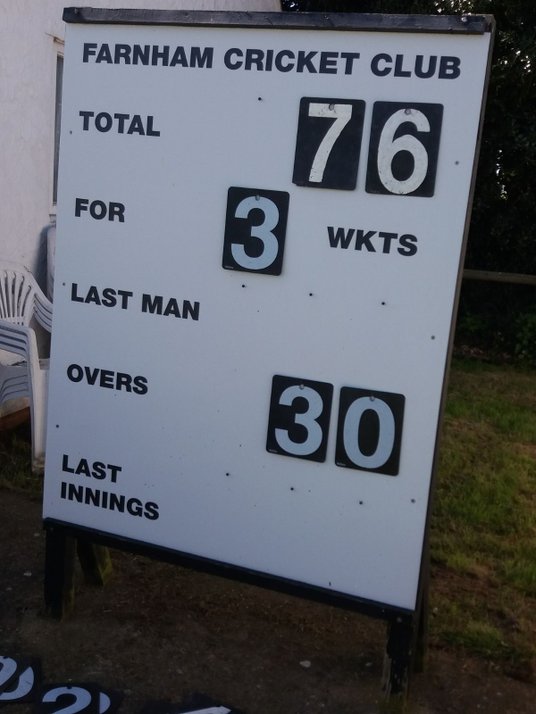 Thorley came up short in the season opener at a sunny Farnham on Saturday. Set an enticing target of 145 to win from 45 overs they ended up on 125-9, losing by 19 runs.

Farnham started well putting on 50 for the first wicket before Adam Sydes struck in his first over, dismissing Prowse for 15. T. Radley, who top scored with 37 and had kept the scoreboard ticking over was next to go after he was cleaned up in Sean Pack's second over with the score on 67. He struck again in his next over in the middle of a spell of very tight bowling in tandem with Sydes.

Despite two more wickets falling, Farnham somehow accrued a vital 25 runs from the last 3.4 overs. All of the five Thorley bowler picked up wickets but Sean Pack was the pick of them taking 3-20 from his nine overs. Jack Lamb chipped in with very good figures of 2-19 and Adam Sydes was miserly taking 1-12 from his full spell.

In reply, Thorley lost Mark Dellow in the 2nd over to a calamitous run out with his brother Alex. Adam Sydes steadied things as he carefully built a score of 14. By the time he was out the score had grown to 64-4 but scoring had been very difficult on a slow, low bouncing wicket with a soft outfield.

Two further wickets fell with the score on 67, in the 31st over. At this point, the target of 145 seemed increasingly out of reach. A late flurry of runs from Joe Lane, who top scored on 19, together with Dave Wheatley (14) gave Thorley a little sniff of victory, but with 45 still required from the last 4 overs both Wheatley & Lane fell in quick succession.

Some lusty blows from Jack Lamb (17) at least took the Gannets close to a second precious bonus point which was achieved on the last ball when Sean Pack and Jordan Griggs scampered home for the two runs required.

Farnham won the toss and decided to bat.