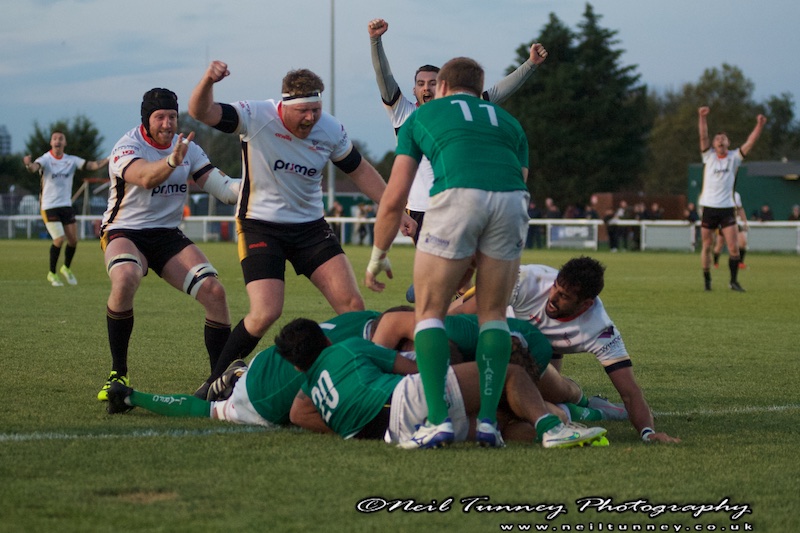 Bees take the spoils in entertaining bottom of the table clash

Irish eyes were not smiling as the Bees left Hazelwood with four valuable league points in the bag, with a 12-19 victory against London Irish Wild Geese. Debutant scrum half Mike Hagan rounded off an impressive debut in a Bees’ shirt with a try two minutes from the end seal the win.

Whilst 80,000 punters were paying around £80 a ticket 5 miles up the road at Twickenham, the two hundred odd spectators who had paid a tenner at the gate of the immaculate training facility of London Irish and their amateur side, the Wild Geese, were treated to a cracking game of rugby at the bottom end of National League 2 South.

The visitors would have been disappointed to go into the half time break with just a self-converted try by Jack Jolly – scored with 8 minutes on the clock - given that they had enjoyed 90% of territory and possession in the first forty minutes.

With the advantage of playing with the wind behind their backs, the Bees showed patience with the ball in hand, but were unable – with the exception of Jolly’s score – to break down a well organised home defence. It was, however, one of the rare occasions this season that Pete Glackin’s men scored first or held a lead at the break.

They were first on the scoreboard in the second period too, courtesy of a try for Corey Venus, playing on the right wing in a reshuffled Bees backline. The Wild Geese have gained a reputation of being the comeback kings in recent weeks and there were ominous signs that they were about to press the repeat button against the Bees.

First came a try for winger Brad Meeson who found some space out on the left-hand side to finish under the posts. A gust of wind as he was about to take the kick sabotaged the conversion for Ollie Turner. However, the Wild Geese fly half was able to make amends seven minutes later when he scampered through for a well taken try. His conversion drew the scores level at 12 points a piece.

With the rub of the green so far this season against the men from Portway, plus a front row that was required to play a full 80 minutes due to lack of cover in the dugout, this was the sort of game that that could have easily slipped from the Bees’ grasp.

But with Adam Nunney and Michael Stephens providing renewed energy from the bench and the “spirit of Guernsey” still coursing through the visitor’s veins, scrum half Mike Hagan capped off an impressive debut with a try created through scrummage power to seal the win with two minutes to spare.

The 12-19 win lifts the Bees off the bottom of the league table, one point above the Wild Geese, one and four points behind Old Redcliffians and Guernsey respectively. They have a well-earned break next weekend, before they welcome third placed Henley Hawks to Portway on Saturday 17th November, KO 2.30pm.