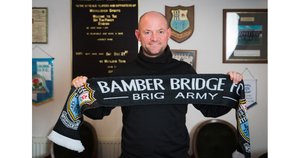 Jamie Milligan says he is “made up” after becoming Brig’s new manager on Tuesday night.

Milligan, 39, replaces Joey Collins in the dugout and will be assisted by close friend and former Fylde assistant manager John Hills.

And the former Brig midfielder spoke of his pride after being appointed as the new boss at the Sir Tom Finney Stadium.

He said: “I’m absolutely made up to be fair, it’s a great club.

“When I left (in 2018) I went in for the job last time and didn’t get it unfortunately, but this time it’s come around and I’ve got it so I’m buzzing.”

Milligan first spoke to the squad as a group earlier this week and outlined his expectations from them.

Having played with many members of the Brig squad in the past, he already shares a close working relationship with several others.

He explained: “We had our first session on Tuesday, where I just explained everything I want from them and what I expect from them in training and in games.

“Obviously I know most of them because I’ve played with them, and a couple of them actually work for me as well.

“It will be tough to go between being a mate and a manager, but at the end of the day I’ve got a job to do and I’m not scared of upsetting people – it will be what it will be.”

Brig’s 3-2 win over Mickleover Sports last Saturday puts them six points above the bottom three going into this weekend’s game with Whitby.

And one of Milligan’s main ambitions is to get Brig further away from that area.

He said: “Obviously first we need to climb the table, that’s the main thing we need to do.

“We want to put on a show to the loyal fans we’ve got and climb that table.

“But I said to the lads that I want them to come in and enjoy training, and enjoy games.

“The lads have bought into it, I know a lot of them from last time I was here as a coach, and I’m really looking forward to it.”

One man that will help Milligan establish that new style of play will be assistant Hills.

And Milligan praised his right-hand man ahead of their debut as a management team on Saturday.

He said: “I’ve known John since we were kids, since we played in grassroots football together.

“We went to Everton and then Blackpool together so I know what he’s like as a coach, he gels well and all the lads will love his sessions.

“We’re both A-licensed coaches so I know we can bounce five years of experience off each other and we’ve got similar ideas that we want to bring in, so he’s a lad that I one hundred percent trust.”

One area that Milligan will look to improve is away form, with Brig yet to pick up three points on the road in the league so far this campaign.

They travel to Whitby Town on Saturday for what will be the new boss’s first game in charge.

And he has already identified where Brig can improve.

He explained: “On the road, I’ve looked at it and they do need to start defending better when they’re away.

“That’s not just the back four and the keeper, but that’s from the front, from the wide men, from midfield and from the back five as well.

“They’ve just got to maybe dig in a little bit more when they’re playing away.”

Milligan will be returning to Irongate in a coaching capacity for the first time since leaving in 2018 to join FC United.

And he is looking forward to seeing the fans that he spent so long playing and coaching in front of once again.

The 39-year-old said: “It will be brilliant (next Saturday against Matlock Town at home).

“I’ve had a good relationship with the fans, I always did so as a player and I know how loyal they are home and away.

“It will be great to get back home and have a home game, and put a show on for the fans really because they deserve it.”