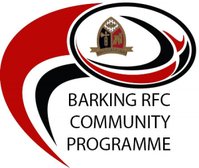 FOR THOSE who may not know the Club, principally through the eﬀorts of Neil Kersey, has been putting together a Community Programme over the last few months, involving everything from Tag Rugby to reading schemes and the Duke of Edinburgh Awards.

Neil has summarised what has been going on in the name of Barking RFC.

Last month the annual Schools Tag Tournament for Yr 6 was again held with great success at the club and most of these schools have agreed to take part in our fortnightly league, all of which is supported by the Borough of Barking and Dagenham and hopefully the RFU.

We have recently completed a very successful six-week course at Dagenham
Park and early in the new year their Headof PE will be bringing along ten boys to join in with our 12s and 13s at training.

Pleasingly Barking Abbey have now Year 8 and 9 teams and we have been actively involved in the coaching there. That resumes in January.

Jo Richardson School, Eastbury and Riverside have all committed to us for coaching during the next term.

However we are now fully committed and to extend further at this point we must add another qualified coach who has the right attitude, commitment and personality.

RUGBY READERS AND GET FIT 2 READ

Through both of these initiatives we have received from the Council, Primary Schools, Childrens Services and the RFU some lovely recognition and praise.

The extension into secondary schools is happening a little ahead of schedule but these programmes are at the very core of our work and the visibility and appeal it provides to external funding through Government, companies and Foundations cannot be underestimated.

All schools have contributed financially to both the rugby coaching and the reading programmes.

We have built a bond and working relationship with the Dallaglio Foundation that has seen us rewarded with a Dof E Licence to deliver the Bronze
Award.

This will be seed funded by the DF (£15k)for the first two years and covers our training and expenses. In turn this has been well received by those
LBBD schools that are looking to provide candidates.

We have recently been awarded the franchise to run as an O2 Touch centre. Serious marketing will begin in January for a March start-up.

The RFU are providing £5k over 3 years to help with ref and coaching costs but are also providing free coaching courses and and full IT support.

In conjunction with LBBD we are to begin this programme in Feb. Again subsidised financially by LBBD it is a GP referral course over a 12 week period for individuals.

It incorporates basic fitness training and exercise around a rugby theme and is aimed at members of the public with high B.M.I. and a sedentary lifestyle.

Further on if the individuals remain as either social or playing members of the club the council will pay the club membership fees for the first two years.

To summarise we have made some tremendous advances on a number of fronts but we must be cautious that financially the work we deliver can be covered for our team. This is being put into place for the long term.

Coach education and training is as important as anything at this stage and hopefully will be in conjunction with the needs of the Youth and Mini sec-
tion.

Many, many thanks and appreciation to all those who have contributed whether day to day or when your commitments allow to any part or role of the Community Programme.

It would not have reached this far without you and we hope we can count on your continued support as we move forward and look to establish the Club at the very heart of its community.