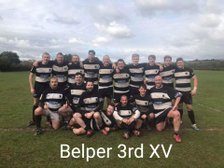 3 male senior teams out for the first time in years!

Saturday 6th October was a great day for Belper Rugby Club. For the first time in nearly 10 years the club fielded 3 male teams to take part in 3 separate senior fixtures. The 1st XV hosted Bakewell in their 4th league game of this campaign, the 2nd XV hosted Ashbourne in a friendly game after Bakewell 2nd XV were unable to fulfil the fixture, and our 3rdXV made the short journey north to face Tupton in a friendly.

This really was a great day for the club and shows exactly where we are at the minute in terms of our development. We are getting more and more players making themselves available for selection week in week out, which is making selection a lot more competitive, and as a result numbers at training are absolutely booming! These improvements in commitment and attitude is really starting to show on the pitch too with all 3 teams putting in strong performances against tough opposition which all of the boys should be really proud of.

Unfortunately, our 2nd XV and 3rd XV lost by a point and 2 points respectively, but there was still plenty to be proud of in their performances. Both teams led for large amounts of the games but were just edged out in the end. It was great to see some old faces making an appearance in the Belper shirt and hopefully they make themselves available more regularly moving forward.

This increase in availability has made selection for the 1st XV incredibly difficult and players really are having to fight hard to retain their places for the following week. Our 1stXV managed to put in a sterling performance against a tough Bakewell outfit, and ended up running away with a 64-0 victory. The score line really was not a true reflection on how tough the game was, and Bakewell made us work hard for every try we scored. The most pleasing thing for me as Captain was that our intensity never let up. With 10 minutes to go and winning by 50+ points we were still defending our try line with everything we had to stop them from scoring.

We have a weekend off from league action this week before both our 1st and 2nd XV continue their league campaigns on the 20thOctober with the 1st XV making the short journey to face recently promoted Tupton, and our 2nd XV facing Tupton 2nd XV at home. Who knows, we may even get another 3rd XV squad out at this rate!