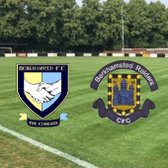 Steve Davis, Chair of Berkhamsted FC and Christian Armond, Chair of Trustees of Berkhamsted Raiders CFC are delighted to announce an agreement whereby their respective senior teams will groundshare at Berkhamsted FC’s Broadwater Stadium from the start of the 2022/20223 season.

Berkhamsted FC play in the Pitching In Southern Football League at Step 4 of the English football system and finished last season in second place, narrowly missing promotion. Berkhamsted Raiders, while primarily a youth football club, also have a senior team, playing in the Spartan South Midlands League Division 2 at Step 7, who have been ground sharing at Kings Langley FC in recent seasons.

The agreement allows Berkhamsted Raiders CFC to play its own home matches at Broadwater from the start of the 2022/2023 season. Many of the players have been through the Raiders club programme from an early age and many are also coaches within the club too. Attendances at Broadwater were up by 25% last season, and both teams would love to see more supporters coming through the turnstiles to watch football in Berkhamsted.

Steve Davis, Chair of Berkhamsted FC said “We’re delighted to reach this agreement with Berkhamsted Raiders and are looking forward to hosting them at our Broadwater Stadium and building our partnership with our youth and senior teams.”

Christian Armond, Chair of Trustees, Berkhamsted Raiders CFC said “It’s great to have our senior team playing in Berkhamsted, where they belong, and I’d like to thank Steve and the team at Berkhamsted FC for their positive and constructive approach in our discussions. I’d also like to say thanks to Kings Langley FC who hosted us for the last few seasons. We are keen to build our partnership with Berkhamsted FC and hopefully build pathways for our young players to get the opportunity to play for their hometown club.”

Berkhamsted FC are the proud custodians of senior football in Berkhamsted, going back to the foundation in 1919 by servicemen returning from the Great War, giving the club its nickname, The Comrades. The club is run entirely by volunteers, and the Broadwater stadium and clubhouse provide a much-loved focal point in the local community, hosting local pool and darts leagues as well as numerous charity, veterans and ladies’ football matches. More than 500 people watched this season’s play off semi-final fixture, and the club would love to see as many of those people as possible watching football at Broadwater next season.

Berkhamsted Raiders was established in 1996 from a collection of individual teams run by enthusiastic dads who wanted their kids to enjoy football. By 2008, the Club had grown to 30 teams and in 2021/22 we ran 94 youth teams for girls and boys from U7 to U18 plus a Senior team and sections for Veterans, Ladies, Futsal, Walking and Inclusive Football. The Club operates as a Charity, led by a team of volunteer Trustees, and supported by around 200 volunteers in the roles of Team Managers, Assistant Managers, Age Group Coordinators and Committee Members.

The Club plays competitive football, but we measure our success by the enjoyment and involvement of children from our local community, not just by winning Leagues and Cups. The Awards we have won are a testament to this inclusive approach to the provision of football in the local community.